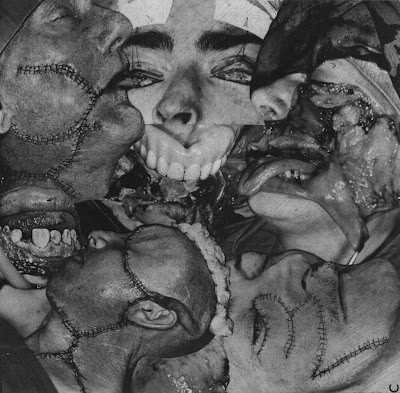 So you're probably wondering why I'm writing about a demo from 2006. Well if someone sends in a release by a band called ED GEIN MOTHERFUCKER you take notice. Also the sender, Marc Broude, added in the email, "Due to it's extreme obscurity I just wanted to share this with you. I hope you enjoy it." Let me tell ya something Mark if you ever plan to reissue this then package it in a shoebox. Only those people who know the real life history of Ed Gein will get that packaging idea. I won't explain it here so just take my word for it because it's a perfect idea. Now as far as this band is concerned calling EGM obscure is putting it mildly. There is absolutely no info on them as far as the Interweb goes. All I know is that the band was a three piece formed in Chicago, Illinois in 2006. The band consisted of bassist/vocalist Marc Broude, guitarist Eric Sepata and drummer Danny Cortez.

There are two other things of importance to note. The first is that EGM was a side project of Cortez and Broude who also played in a black metal act called ZOG. No info on that band either as far as musically but we all know what ZOG refers to and if you don't well you're in for a surprise. Although not as big as a surprise as what the cops found when they opened up a few shoe boxes at Ed Gein's Wisconsin farmhouse decades ago. The second thing to know is that EGM ended in 2007 because of the death of two band members, Sepata by suicide and Cortez from heroin overdose. What they left behind was a four song blast of pure aggro grind that today most listeners take for granted. Technically this is the style of grind which first evolved out of the hardcore punk scene many years before. I'd say it owes more to the anarcho crusties of the late 80's underground scene than to the metal stalwarts like NAPALM DEATH and REPULSION. Consider this one a little gem from the past which any grind head should suffer for. It's also filled with irony with songs like "Killing Her, Killing Him" and "Dead Man". Makes you wonder, right?