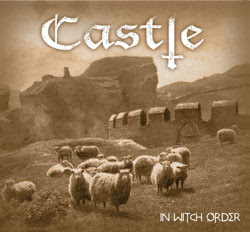 What if Tony Iommi brought in a female vocalist to front SABBATH in the mid 80s after working with Ian Gillan? Well it would probably sound similar to this debut release by San Francisco's CASTLE. Here we have one of the better surprises for 2011. CASTLE are a power trio consisting of guitarist Mat Davis, drummer Al McCartney and bassist/vocalist Elizabeth Blackwell. There are so many reasons I have for liking this release but I'll start with the obvious and that's the band's sound/style does not pander to the cliche stoner/sludge theme within the present day Doom genre. Instead CASTLE reunite with some classic Heavy Metal influences. There is absolutely no song retreads on here, no long jams or faux psych drones. There's eleven cuts all relatively short with only one longer than five minutes. How they ended up on the German label Ván Records is a another surprise and actually works well in their favor. Europeans, especially Germans, love their Heavy Metal so a band like CASTLE would be treated as royalty over there. Look at Doro Pesch who is still looked upon as the Queen of Metal. If CASTLE wants to ride along within the Doom genre I can understand since anything is better that being called New Wave of American Metal. But as far as their sound and style is concerned they're not sludgey, not stoner, not from Atlanta, not epic, introspective, atmospheric or depressive, not the return of that Dutch band of the same name from the 90s and they're not a NEUR-ISIS copycat. Simply put CASTLE rocks!

In Witch Order rocks better then whatever flavor of the month band you've been told to like. Guitarist Mat Davis lays down these catchy, dirty sounding riffs which are not Iommi leftovers from the 1970s like what so many of today's Doom genre guitarists are picking through. He's simply taking the template and signing his own name onto it. He doesn't progress far with it but does keep things sounding fresh by not repeating the same riff for 6 to 8 minutes. Every song on In Witch Order contains a cool, catchy signature which sticks with you long after playing this release. Then there's the versatile talents of Elizabeth Blackwell. This woman might not be a disciple of Geezer Butler on the bass but rocks the four stringer a whole hell of a lot better than some others. You know how some bands shove a bass in a woman's hands just for the purposes of eye candy in order to get attention and signed? CASTLE ain't one of those bands. Blackwell's bass work along with drummer Al McCartney creates a complementary bombastic feel to the songs on here which make a perfect counter weight to Davis' riffs as well solos. "Sleeping Giant", "Knife in the Temple" "Spellbinder" and "Slaves of the Pharao" showcase the power trio chemistry this ban has in a great way. Then there's her vocals which are absolutely perfect since she fluctuates her delivery with various feminine accents all in the right places. On cuts like "Descent of Man" and "Fire in the Sky" she's got that nasty you don't wanna fuck with me type of vocal style going. On "Total Betrayal" she's down right sultry with an air of mystery that simply commands your attention. On "Shamen Wars" she's got this really aggressive bluesy delivery as if this was an L-7 song. On a few cuts Mat Davis' provides added vocals which once again makes things superb. There's nothing over the top or grandiose going on here people. It's just a perfect release that grabs a hold of you and refuses to let go. Once more with feeling, CASTLE simply Rocks!