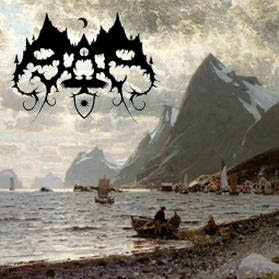 If there's an overseas flight straight from a US airport to Norway this should be playing over the intercom while the flight attendants serve Farikal (lamb and cabbage) as the in-flight meal with plenty of whatever the choice Norwegian beer is in stock. By the time you touch down there would be a plane load of farting drunks (well I don't know about you but cabbage gives me some serious gas and I like cabbage) wide eyed and vicious from over-dosing on True Norwegian Black Metal. This is SKAUR's debut full length only after starting out back in 2003 and previously releasing (wait for it) ten demos and two splits. Underground BM forum junkies would call that effort 'uber-kvlt' and maybe even 'troo'. Actually I'm going on memory with that comment. I haven't been on a forum site in years and probably never will again. It's bad enough I stumble upon pretentious Interweb scribes (aka: out of work indie rock losers/hipster retards masquerading as metal fans) who like to make provocative hipster vogue statements like "Norwegian Black Metal is dead" as well as "The future of Black Metal is progressivism". I'd love to find one of these faceless pussies, set fire to their dog eared copy of Lords of Chaos and shove up their ass. I would also have SKAUR's self titled debut full length playing in the background for emphasis on how ignorant they truly are.

For the record SKAUR is not adding anything new to the genre. They (aka: Normann - Vocals / Guitar, Simon Larsen - Bass / Vocals, Ivel - Guitar and Hetzler - Drums) are simply keeping within the boundaries of a traditional sound structure. That particular sound is heavy on the treble, epic in atmosphere and includes some folkish elements which I'm always a big fan of. Contrary to what the beautiful cover artwork depicts this band's music is not at all inviting and friendly. You could keep your beer cold by sitting it next to this disc. The guitar melodies alone will bring down the room temperature a few degrees. Normann's vocals, whether he's screaming harshly or his throaty beast vox, have a frosty bite like a harsh winter storm. The five proper songs and one instrumental as a closer on here have variety in structure and yet it does all seem like a conceptual piece. Opener "Fullmaanesang" comes at you like a folk tale of woe, a nordic saga that adds some clean sung vocals for added texture near the end. The next cut "Nordnorsk Svartmetall" lifts you up as if you've sprouted wings and are now soaring high above that nation's majestic ancient landscape. It's an almost ten and a half minute flight. There are moments when Normann lets out this scream which even sounds like the cry of an eagle. "Heimfar" is probably the most intricate song on here with it's varied twists and breaks in momentum. After listening to this release a few times I kinda thought that SKAUR is in a similar league with fellow Norwegians acts KAMPFAR and ISKALD, two of my favorites as far as frosty pagan black metal goes. And like those two bands whose 2011 outputs have found their way into my list of top BM releases of the year. So to does this masterpiece and I'm not speaking hyperbole either. Norwegian Black Metal is far from dead. Although it might be too cold and cruel for the weakling amongst us.