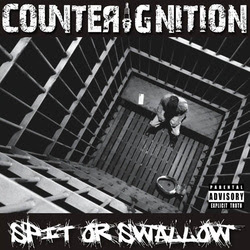 Although this band hails from Kovin, Serbia they could be from right here in the states. Seriously there's a Thrash/Groove Metal act in every burg around the country that has a live music scene. But I shall not let my own personal stateside experiences and prejudices effect a quality (?) review of this release. Everyone knows I'm objectionable (ha!) I mean as far as my ignorance the Serbian music scene goes these guys could be kings. What has become old here in the states is still thriving in Europe. Look at Thrash and Speed Metal for example. Now I'm probably wrong in classifying this as only Thrash and Groove Metal, not that those styles are not in play here which they are. But the fact is that COUNTERIGNITION play a combination of many variations of those themes which run throughout their songs. They even toss in some folk elements and more melodic passages which really blows away any pre-conceptions. Pigeon holing them would simply be an insult. What I like is how they pile on plenty of sludge into those grooves at times plus they include some edgy solos added to that the vocals are rough sounding. Those three elements alone plus with their variations show that these guys are not playing by the genre template rules.

When I first read the info about em and saw those words "thrash/groove metal" I thought the worst. For those of you who read Scumfeast Metal 666 regularly (and frankly who doesn't) you know that I have no love for that genre of metal. I even consider it mainstream instead of extreme. Listening to this release I can honestly say that this band has progressed ahead of the tired thrash/groove genre to add personal character into it. And they do it with subtlety plus the production on here is slightly raw which makes it an interesting release. You wouldn't think it to be technical but once again that's all in the subtlety. They throw a cool sounding headbanging groove at you and then bend it towards a different direction completely. You listen to this a few times and you can catch so much they are hitting you with. Like I said I'm not a fan of the genre but after listening to this it's obvious that COUNTERIGNITION is pushing the boundaries to meet with their own creativeness.