SATAN'S HOST - By the Hand of the Devil CD review 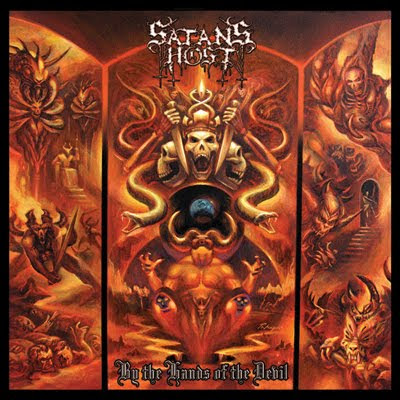 A few years ago SATAN'S HOST played a gig at a local club and unfortunately I had to miss it. Yeah Black Metal gigs are tough for me especially on Wednesday nights. The club also serves as a practice space with various rental rooms in the back. Two friends of mine, whose band was practicing in the back that night, caught SATAN'S HOST's set. I think they were touring in support for their The Great American Scapegoat 666 release which came out in 2008. Anyway my friends told me it was a great set which I missed albeit hardly anyone was there. So listening to this new one, as well as 2009's Power Purity Perfection 999, is a constant reminder of greatness missed. For me the greatness of this band lies in vocalist Harry "Tyrant" Conklin who everyone knows from the Power Metal act JAG PANZER. (He goes by the name Leviathan Thisiren with this band) It's the power and range of Conklin's vocals (like a cross between King Diamond and Bruce Dickenson) joined with the music which makes this sound like MERCYFUL MAIDEN. Personally I'm not a big JAG PANZER fan, OK honestly I don't like em at all which is why I couldn't even review their newest long player this year but I like SATAN'S HOST. To me they're the dark side of the two headed coin and this head has the face of the beast on it.


By the Hand of the Devil is this band's best release by far in their long career which goes back to 1986. The clean arching majestic yet dark vocals laid upon the dark and dirty riffs with a solid rhythm section foundation which excerpts power. Guitarist Patrick Evil rivals Conklin's soaring falsetto vocals with his more cleaner melodic solos which are hot enough to cut steel. Certain cuts add background gang shouts that would be perfect for a crowded club audience to participate in. Yeah as long as it's not on a Wednesday night, right. There are a few newer bands these days who try to conjure up the ghost of MERCYFUL FATE. Some come close while others fail but mask it in their stage costumed theatrics. This is the only act today who are worthy to have their name mentioned in the same sentence with MERCYFUL FATE. Listen to Conklin's screams on the opening title track, "Revival", "Before the Flame" or on "Black Hilted Knife". I promise that you will turn to stare at your copy of MERCYFUL FATE's Black Masses 12", which you have tacked onto your wall (what doesn't everybody have there's up on their wall?) and ask "is it you"? OK that's pushing it .

This release breaks into many parts. The first half being more of a galloping classic metal structure with the second half starting out more heavier with songs like the previous mentioned "Black Hilted Knife" and "Revival". "Fallen Angel" has an almost thrashy URIAH HEEP feel to it. There's no keyboards of course but if they were to slip in some Ken Hensley Hammond organ in there it wouldn't hurt especially since Conklin sounds like he's conjuring up David Byron's best theatrical vocal prowess albeit from the darker side. Just to note Patrick Evil plays much faster than Mick Box ever could. "Inferior Worlds" is another tribute to 70's Heavy Metal cloaked in black. And if that's not enough for your sick twisted minds (think about it you are listening SATAN'S HOST people) there's a bonus track of the band covering "Norwegian Wood". Now I'm really sick of the BEATLES because I've been punished by hearing their music overplayed all of these years. But if memory serves me I do believe the lyrics are not "I once saw a church. Burn to the ground. Smoldering ash. I danced in the flames. Unleashing Hell. Sworn to Satan". What a way to end a record.

Here's two videos for ya:

And here's their cover (?) of "Norwegian Wood" and don't forget to sing along to the lyrics.

Burn in the flames
Of Norwegian Wood

Labels: SATAN'S HOST - By the Hand of the Devil CD review