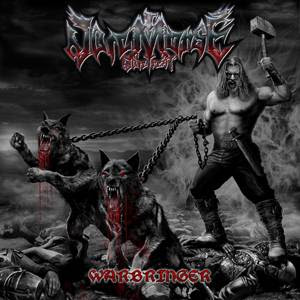 This is the second full length from the mystery band NO REMORSE NO RETREAT. Yes they are a mystery since there’s no Internet info on em and their MySpace page has very little info as well as no photos or an actual home address. It states they’re from England Wales United States so either they were drunk when putting in the info or they’re lying. I’m guessing they’re English since Iron Age Records is an English label and most likely a bunch of skinheads/punks from another band who don’t want their identities exposed. The only thing I had to go on was that their debut release, To Glory We Ride, is pure fuckin English Oi/Punk Rock n Roll. It kind of reminds me of late 80’s ANGELIC UPSTARTS.

With that supposition we come to their latest, Warbringer, which at first I thought was some killer stuff worthy of running out my back yard and screaming “Death to False Metal” at the top of my lungs. Look when you open a release with a cut like “Will of Iron”, which is the chorus by the way, and then run into a structured song you’ve gotta go holy shit that’s fuckin cool. On this release, NO REMORSE NO RETREAT has moved onto a more Hardcore meets NWOBHM/Thrash direction. If any band could fly the flag of Battle Metal it’s this one with cuts like the afore mentioned opener as well as “We March”, “Fight or Die” and of course “Heroes Never Die”. The only cut on here that deviates from the template is the closer, “When Tomorrow Comes” where they get all Doom on us. Although that’s to be expected since it once again fits the pattern of what a skinhead/Punk band would do. All in all this is a fantastic release for any Punk or Metalhead.