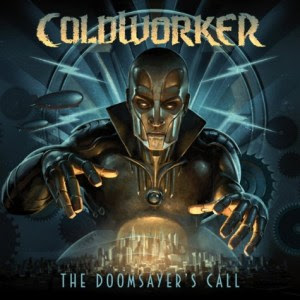 In all honesty this is my first time checking out COLDWORKER even though they have been around since 2006 and were formed by former NASUM drummer Anders Jakobson. Normally that would mean a corner of my coolness card being cut off but with a name like COLDWORKER, well I must admit apprehension on my part. What's in a band name, to me a lot. At first I had the feeling I was going to be into something near the "core" side of the aisle. Thankfully after hearing the first couple of songs that fear was put aside.


Like I mentioned above this band has been around since 2006 and The Doomsayer’s Call is their third full length overall. The band hails from Sweden and yet does not follow in the pure old school tradition nor are they melodic. Take that old Swedish death metal sound, subtract the hardcore influence and add some grind. That's what this band sounds like on these thirteen bad luck blasts and it sounds pretty damm good. Don't just take my word for it. Dan Swano has been twisting the knobs (aka: mixing and mastering) for this band since their creation. So look if he's involved you know it's gotta be good.


Although I tagged this as death metal there's still a bucket load of variety to COLDWORKER's overall sound that makes this much more than typical. I'm sure genre purists will not take that so well since the band adds plenty of grinding blasts as well as caustic hardcore aggression. Fornbrant's vocals are thoroughly brutal sounding. The guitar work is decent as far as riff work goes but it's the solo work which to me is reminiscent of Chuck Schuldiner. They have that fluid flow to them. In fact as far as the band's death metal style goes these Swedes lean more to the US style then their own nation's DM heritage.


I kinda feel overwhelmed this early in the year with all of these incredible releases. But the fact of the matter is that COLDWORKER's approach on The Doomsayer’s Call is over the top extreme in the metal dept. It's an all around incredible release full of heavy grooves, blasting excitement and tech savvy musicianship that's not driven by ADD. Crack open a sliver of space in that closed musical mind you have and insert this one.