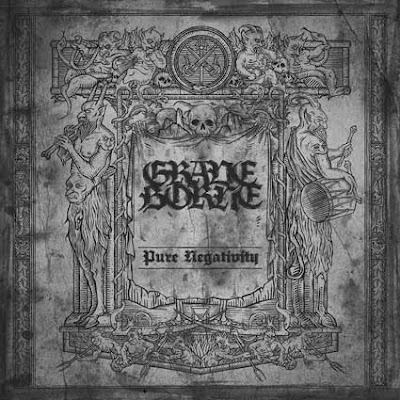 When I think of Finnish Black Metal the words raw and necro come to mind. This five piece band from Helsinki, who's debut full length here came out on a Greek label ( Nykta Records' motto is Black Metal for the Late Hours), sounds closer to the more melodic tones (albeit aggressive) of their neighbors in Sweden. They will probably take that as an insult but in all honesty on this release GRAVEBORNE sound better than anything that has come out of Sweden as far as BM is concerned in a while. Yeah MARDUK had a decent EP but we're waiting on the long player and WATAIN's last full length wasn't worth all the hype unless you're a hipster retard. So it's up to these guys to fill a void in a sub genre which they do very well. GRAVEBORNE's BM sound falls into that mid 90's second wave era territory. They've got that fierce epic wall of blackened noise sound without having to rely on keyboards for filler. Two guitarists, bass, drums and a singer whose vocals are harsh in the high range and yes he can scream like a fuckin banshee.

Pure Negativity is not a release where you can just pick out a song or two for a reference. It's one of those unique start to finish releases where you push play and that's it. Forty some minutes later when it's finished you can get on with your life, for what it is. As far as their array of cuts go there's a lot of variety as the band moves about with intricate songs that draw you in and then spring a trap of intensity on your unsuspecting mind. Other times it's an aural attack that pulverizes you until bloody pulp streams from out your ears. The best factor of all is that the production on here is not shitty or polished to modern plasticine standards. I'll bet I could play this for some kvlt BM snob, say it's an obscure release from the mid 90's and they would believe it. That's the key to 99.9% of all Finnish Black Metal, authenticity. As many people know I harp on a lot about the greatness of Finnish Black Metal. Actually that's putting it lightly since I usually shove it in people's faces then scream "listen to this & die you fucks". (FYI; my ancestors came from Holland so I'm not being bias with past associations of national heritage) Be that as it may there's an undeniable truth in extreme music and that's when it comes to Black Metal, that nation has sirred some consistently great bands. Add GRAVEBORNE to that long list and die you fucks!