BURN EVERYTHING - Last Run Through the Ruins CDEP review 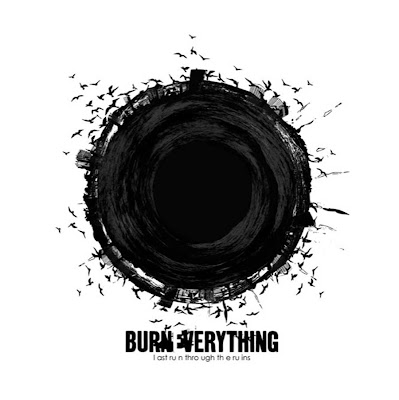 BURN EVERYTHING - Last Run Through the Ruins CDEP
Self Released
Genre: Grindcore/Hardcore
Rating: 4/5

Well at least they have the right band name since this Rochester, NY based act sound like they're ready to commit arson. I'm guessing whenever they do a show most of the crowd stays at a safe distance from the stage. BURN EVERYTHING combine swift neck snapping tempo changes mixed with meaty riffs and a singer (actually a screamer) who probably gets in people's faces in order to start a confrontation. One of the best things about smaller clubs (this is from my experience working at one years ago) is that you get to see bands like this tear the place up on stage and sometimes while they're trying to leave through a crowd they've just made enemies with.This band's sound overall is more of a grinding post hardcore state of extreme which shoots for brutality and a loose performance over technical showmanship. It's similar of the style which caught fire back in the 90's underground hardcore scene. (from up around the Northeast to be exact)

Although some people (re: tech snobs) might be turned off by BURN EVERYTHING's raw approach. I find it a fuckin relief to hear a band concentrated on the overall primordial force within their gut which shows in their songs as opposed to musical wankery. Last Run Through the Ruins is a fast blast with no time wasted on mediocre pursuits. Give this band fifteen minutes of your time and they will definitely inspire you with rage. This is their second release overall with their first one being another self titled self released EP from 2008. They're also offering it free from their Bandcamp page. Wow free rage how could you go wrong with that? I don't know if I could take a full length's worth of this though. Short fast rules with acts like this. It's kinda like when you get into a fight. If it lasts more than thirty seconds than you're not fighting anymore, you're dancing and this stuff here ain't for dancing.

Labels: BURN EVERYTHING - Last Run Through the Ruins CDEP review