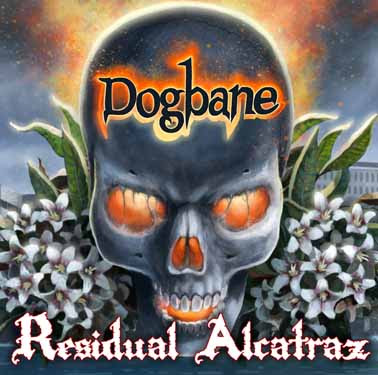 For those of you who don't know it I'm an arborist (tree surgeon) as well as a landscaper with a fair knowledge of plants and shrubs either nursery bred or native. So when I saw this band's name I immediately thought to myself that they're named after a poisonous plant or more commonly described as a weed. By the way Dogbane is similar to Cannabis since it's also a fiberous plant and sometimes goes by the name Hemp Dogbane. For the curious out there I wouldn't try smoking it. Well now that I've told you all what I really do for a living (unlike most music media people who are unemployed post grads) let me tell you about this North Carolina band. First off the members of DOGBANE are not a bunch of young guns new to the music scene. The band is made up of former members of such NC acts as AVALON, UNSETTLED, SOCIETY'S BURDEN (which is the only one I've heard off) RICTUS GRIN and RHENIUM. The band's sound is heavily influenced by late 70's/early 80's classic metal as well as bands whose style of music would go on to become known as Doom. Also they're not a bunch of hipster retards hopping onto a now popular metal genre style by rehashing music they recently found in a used record store (well actually downloaded from a website). North Carolina has a wide variety of bands who play just about every type of metal genre you can name. But one thing I've learned is that classic sounding metal, whether it's the heavy 70's era (PRIEST, SABBATH,etc) or 80's NWOBHM, will always reign supreme.

DOGBANE is one of those types of bands and they're damm good. They even have a classic metal five piece lineup of twin guitarists, bass player, drummer and a vocalist who sings clean and has a good range. When this release starts out with the song "Ride the Serpent" and you hear that riff. Your arm will just rise up flying the horned fist out of habit and start screaming "yeahhhhh"! "Born to Die" picks up the pace with chunky riffs, MAIDEN-esque soloing and artillery sounding drumming. From that point on it's that same formula of explosive classic metal which hearkens back to my teenage years. Listening to this is akin to when I first saw PRIEST in the 70s, it's that exciting. As I said before their vocalist, Jeff Neal, has a good range and on "Banished" he lets loose with a Halford-esque scream. "Annihilator" shows off some heavy SABBATH influenced riffage along with more of that Halford style singing with even some PRIEST like song structure ala twin guitar soloing. "Devil in the Dark" pushes the dual guitar theatrics and the classic metal elements to their fullest. I'd say it's between that one and the opener as favorites but in all honesty every song on here is a favorite. "Burning the Light" is classic Doom, no not sludge not stoner rock, this is DOOM! I'm talking about a mega riff forged by the gods of metal and handed down to DOGBANE, after CANDLEMASS used it of course but still great. "Fire and Brimstone" borrows from LINK WRAY by starting and ending it with his signature song "Rumble". Final cut "How the Mighty have Fallen" has another killer, KILLER! savage sounding riff plus a rhythm that sounds so fuckin familiar (early 80's?). I've said enough this release rules!