SURACHAI - To No Avail LP review 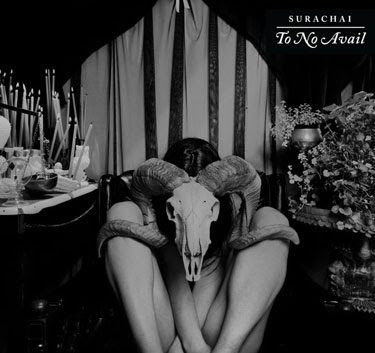 After listening to this I got a black and white vision of some old man bent down on his knees licking the gutter of some filthy street in the inner city simply because he was thirsty. What else can I say, listening to experimental black metal gives me weird visions. Basically that's all I can do while sitting here listening to the music while waiting for something to inspire me to write down some pertinent information about it. Basically SURACHAI is a black metal act (one man in a basement?) out of Chicago and To No Avail is the second full length release. It's a vinyl-only release for the snobs but it's also available for digital download. If you've been reading the papers of late then you know that's the future for the music industry as far as distribution. Getting back to the music, To No Avail consists of two around ten-minute songs mysteriously labeled "Side •" and "Side ••". Musically SURACHAI takes some influence from the modern genre purveyors from France and the Ukraine. In essence it's one part tremolo picked black metal and two parts ambient drone with a minimal amount of harsh screamed vocals which makes well for back ground listening, aroma therapy or recreational drug use. For all of you people who are black metal challenged (and there are many of you) then I'd say this is twenty some minutes missing in your life. Get the vinyl copy that way you'll also achieve some sort of exercise routine going by flipping the thing over every ten minutes. Love the album cover, hopefully that's the room where this was recorded.

SORRY NO VIDEO FOR SURACHAI UNLESS YOU WANNA WATCH SOME CHI-COM TALK ABOUT THE RED SIAM POLICY.