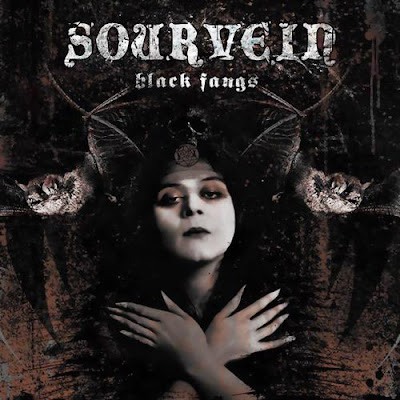 First off I was surprised to see that SOURVEIN some how got the closer spot at this year's Roadburn after show. Then I found out they actually had a new release out. Will wonders never cease? The last time I listened to SOURVEIN was when they finished their set at a North Carolina club I use to work security at in the late 90s. With the exception of myself and the rest of the club's staff I think there were five paying customers there to see em. This was even in the original heyday of Sludge, albeit at the tail end. If memory serves me the band were not very happy when they left the club that night. That's all I'll say about that one. As things turned out the popularity of Sludge Metal went further south when the new decade started just as the band commenced to putting out releases. I thought that the band went tits up since I did see T-Roy ( vocalist and sole original member) singing for some other act which were not sludge or metal at all. I think they opened for ANTISEEN.


Well to my surprise T-Roy had not only kept his southern sludge act alive all these years, even with a revolving door of band memberships, but scored a deal with Candlelight Records. Hey you've gotta respect the guy for keeping it going for fifteen lean years and now finally getting his due. Unfortunately Black Fangs is an instant reminder of why the down-tuned grooves of 90's sludge got boring in a hurry. Hell I was surprised it even made a comeback a few years ago but there is a good reason for it, a fresh audience. Although it seems really ironic that once again SOURVEIN comes out with an album right when the Sludge revival, which was fueled by hipster retard interest to begin with, has died again. Dude can this guy get a break? Well if you're the type of person who hasn't had much of a life to begin with then you'll probably think this is pretty good. Also let's not forget the hype factor for the ignorant. Years ago Liz Buckingham, who is now in ELECTRIC WIZARD, was once in SOURVEIN. That's at least worth a thousand sales. I wouldn't go as far to say this is of similar quality to that most recent turd of a release ELECTRIC WIZARD dropped (and all the hipster hype propagandists had to swallow). This is second tier southern sludge which is worth a listen to but will most likely end up collecting dust in your collection.