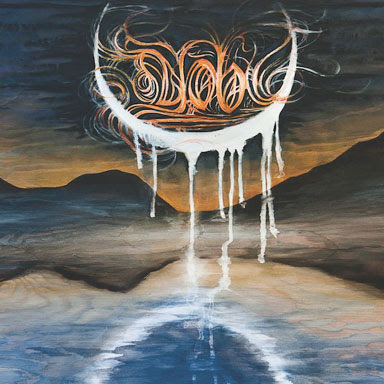 
Normally when a band's new release is about to hit the streets there's pre-release promotion. Sometimes the promo info will go as far to stating it's the band's best release to date. On the other hand there are cases were the promotion goes a bit to far and becomes pre-release hype. The latest release from this Eugene, Oregon stoner drone act has some surprises on it and I can say that because I have the previous five releases plus the one when guitarist/vocalist Mike Scheidt changed YOB into MIDDIAN. But the biggest surprise of them all is not on this release. That surprise comes in the form of the indie rock loser media who in the past few months has just now latched onto this band like a bunch of starved leeches. Now I don't get the same type of press releases which the indie rock loser media receives, obviously because I'M BETTER THAN THEM. So my question is when did the lowest form of scenester, aka: hipster retards and indie rock pussies, decide that they're now into a fifteen year old band who just months ago they never heard of? For those of you with short memories the same thing happened last year with ELECTRIC WIZARD. The cocksucker scribes of the indie fool media pre-hyped Black Masses to the point of silliness. Of course when Black Masses finally came out the thing was one big turd. I'm a ELECTRIC WIZARD fan so yes I know it was their worst release so did all of their real fans. I laughed my ass off because the indie rock media pussies, who were never fans of the band and after months of hype, had no choice but to say they liked it. Now I figured with no credibility to speak of these hipster retards and indie rock pussies would at least cease and desist or cut their hands off in shame. Obviously they couldn't even get that right and now they're hyping up another band. So with all of that I got this in for review and I'm wondering oh no not again.

For those of you not in the know let me shed some history on the band so for you to understand better. Mike Scheidt is the guitarist and vocalist of YOB a band he founded in 1996. In 2000, when indie rock losers where listening to alt. country and fag pop, Scheidt and two other guys released a three song demo simply titled YOB which got them attention. A few more years went by then the band released their debut full length Elaborations of Carbon in 2002 followed in 2003 with Catharsis. By this time the band finally had a steady line-up with Scheidt, Travis Foster on drums and Isamu Sato on bass. The break they needed came when Metal Blade Records, a label indie rock losers have always shunned, signed the band and in 2004 they released The Illusion of Motion. A year later they put out The Unreal Never Lived which really placed them on the map as far as fans of Doom metal were concerned. Their sound was basically NEUROSIS, HIGH ON FIRE and ISIS ground down to a powder, fired up to a liquid and injected into your temples. YOB's trademark is long songs filled with atmospheric drone, Iommi styled riffs and Scheidt's high/low pitched vocals. Now I said "was" about their sound because things changed in 2005 when Foster and Sato had left the band leaving Scheidt to figure out what to do next. His final decision in 2006 was to discontinue playing under the name YOB, find a new rhythm section and call themselves MIDDIAN. For a short time it worked since they released Age Eternal in 2007 also on Metal Blade Records which was a decent release since it was basically a tweaked version of YOB. Unfortunately trouble came along in the way of a lawsuit over their band name from a Wisconsin act named MIDIAN. Scheidt finally won the suit but the cost took it's toll on the band. So in 2008 Scheidt decided to play under the YOB name again. Former drummer Foster came back and new bassist Aaron Reiseberg was added. Profound Lore Records saw the hype potential and signed them up seeing that sure the scene is now over saturated with bands playing this type of Doom but YOB are old. In 2009 They released The Great Cessation which sounded like Scheidt was exorcising the last demons of MIDDIAN from his soul.

Which brings us up to date with this new one Atma. Some of the pre release hype about this one, aside from the pathetic writings from clueless indie rock loser scribes on hipster sites, suggested that Scheidt was reaching back to his past for inspiration. I even watched a video interview in which he said that. Unfortunately if you are an long time fan you will notice he really didn't go back far enough especially if you consider Catharsis and The Illusion of Motion as high water marks. The surprises I mentioned at the start of this review come in the form of the two cuts which Scott Kelly, guitarist/vocalist of NEUROSIS appears on. The first one “Before We Dreamed of Two” is the longest cut on here coming in at sixteen minutes but strangely enough it's the third cut on Atma. Longtime fans will understand that is strange for YOB but be that as it may the cut runs on a slow burn for a long time until Kelly's vocals jump in and saves it. Also it's on here as well as the other Kelly guest appearance cut "Upon The Sight Of The Other Shore" where you'll notice Scheidt has not drained himself of MIDDIAN. The return of the duel vocals works as does YOB as a four piece. Actually I should say three piece because as was the case with The Great Cessation Aaron Reiseberg's bass is hardly noticeable on here. If Scheidt simply wanted to bill this as The Mike Scheidt Project then I'd understand since the guests steal the show, the bass is absent most of the time and he uses a session drummer live so. The two bad points on here come at the beginning and end. Opener "Prepare The Ground", which was the cut that has been officially leaked and has gotten the hipster retards into a tizzy, is average. That's if you compare it to previous opening YOB cuts like "Ball of Molten Lead" or "Quantum Mystic", hell even "Burning the Altar" from the last one blows "Prepare The Ground" away. It seriously had me falling asleep. The other sad point "Adrift In The Ocean" is basically three minutes of excitement within thirteen minutes of boredom. The title cut is definitely a reach back to the past but to when I would not know. It's more of a boring stoner drone jam done by amateurs. I wouldn't call Atma a turd but the hipster retard hypesters will be eating shit again. For anyone else out there, start with this band's early works because I highly recommend them.