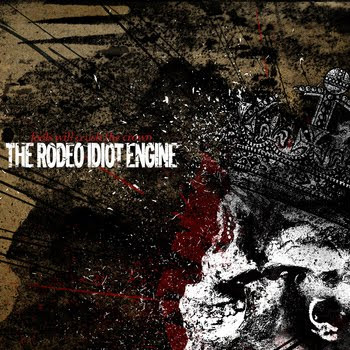 Once in a while I get a release that I have no clue about what to expect right before the first explosion of sound comes out of my speakers. The promo material specified this French five piece as blackened mathcore. Well I like almost anything blackened but I don't hear it on this their second release. What I do hear is Grindcore and Post Rock shoved into a dryer and left to itself for a little less then thirty minutes. Honestly I'm not a fan of this style of music but I'm impressed how five guys could get together to create this kind of chaos and not be hospitalized afterwards. Their vocalist Jerom sings like a maniac from ward 13 and the musicians are from there as well. I'm not off the mark either especially when they come out with songs titled "My Prozac World" or the slightly blackened and sludgey "Past Acts". After continued listenings to Fools Will Crush The Crown I couldn't decide whether to see a doctor for medication or go to the gun shop for ammunition. THE RODEO IDIOT ENGINE (what a band name?) will definitely take your mind some place. Wherever that place my be I'm thinking the walls are institution white with stains of bodily fluids. Be that as it may I wanna thank this band for leaving me in a catatonic state as the waves of their sound punished every brain cell in my head. When I came to my senses I was covered in blood and it wasn't mine. Yes they do come close to breaking the "extreme" meter. Like I said it's not my thing but down right brilliant in their own realm. Now excuse me while I relax to the calm and soothing sound of some brutal death metal.