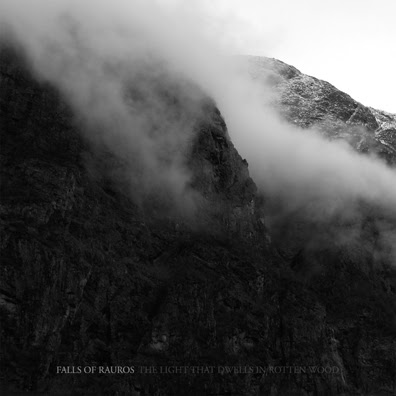 Maine's FALLS OF RAUROS might not be a household name for most people into USBM but for those who like the genre's boundaries stretched to it's limits, they are. Formed on a cold winter's night in 2005 (well maybe not but it sounds good) the band slowly crept out of the North Appalachian woods one day to hand some stranger jogging down the road a CD to take back to the city. The year was 2006 and that CD was the band's first recording, the four song Window of the Eye demo and the rest is history. Ok that previous part was total bullshit but it definitely sounded cool like a folk legend. Besides if a jogger saw four guys coming out of the woods together the person would not immediately think they were a band. It is Maine you know.

The fact of the matter is that FALLS OF RAUROS truly are from Maine and their music is post black metal with melodic folk and orchestral elements added. They made a name for themselves back in 2006 with the release of their debut full length Into the Archaic. The release had that woodsy charm like latter day ULVER. Once bands like WOLVES IN THE THRONE ROOM and AGALLOCH started busting out the crescendos the search went out to find similar acts. By 2010 FALLS OF RAUROS were practically scene veterans with two full lengths out while hipsters were trying to figure out if AGALLOCH were a doom or black metal band. Here's some more knowledge for ya, Bindrune Recordings has slowly become the cool label to find avant garde type of music within the black and doom metal realms. FALLS OF RAUROS simply fits in like a glove.

As far as The Light That Dwells In Rotten Wood (by the way it's called fire) is a fairly melodic sounding release. They stick to a hypnotic treble induced post black metal that shuns anger but invites interspectiveness. You come to expect this from a band who takes their name from Tolkien's Lord of the Rings and are woodys from Maine. Although they could relocate to the Northwest and it wouldn't change a thing about em. It's avant garde folk and orchestral structured black metal, you either like it or not. I'm not so convinced with all of the over the edge non black metal aspects of it. The atmospherics of it are too lazy as if these guys smoke a lot of pot up in them there woods. I won't go as far to say this could be the soundtrack to the new Deliverance movie remake, set in Maine of course. When they keep things in the black it's decent otherwise this is mostly for the faint of heart.

Sorry No New Videos For This One So Here's Something From Their Previous Release.

Labels: FALLS OF RAUROS - The Light That Dwells In Rotten Wood CD review