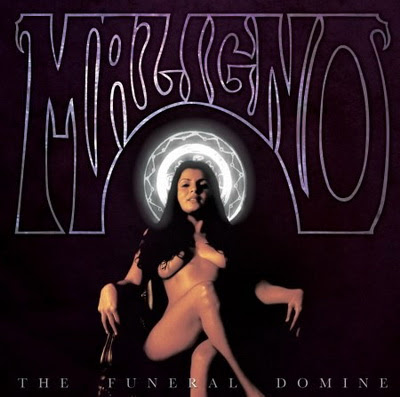 This Mexican band was once hailed as the south of the border's version of CANDLEMASS. Although their singer Luis Barjan can conjure up a little Messiah Marcolin with his vocals he also conjures up Ozzy and anyone who sang in a post grunge retread outfit from the 90s. Musically they're more from that California desert stoner rock sound from the 90s (drop band names here if you care to) which I always found to be more of an offshoot from the Grunge days. MALIGNO know their SABBATH as well as there 70's hard fuckin rock. Guitarists Ivan Tamez and Zef Vega shine on here with catchy riffs as well as the solos. The one thing that stands out the most is how mainstream metal this comes over. MALIGNO could have been a 1990's MTV band. This is their third full length and the biggest surprise of all is that they're not on a mainstream recording label. They might have visa problems with the touring thing though. On my initial listen I thought it was interesting but further listens led me to pick out the non mainstream sounding cuts like "Emperor's Fall" which has a decent stoner groove going for it. "Transmutation" as well with it's 70's styled blues solos which could've been borrowed from MOUNTAIN's Leslie West, sludgey SABBATH structure and Barjan switching from Messiah to Ozzy on vocals. At least the cover art is outstanding with the naked chick surrounded by a dark psych background underneath the band's logo. Would make a great t-shirt.