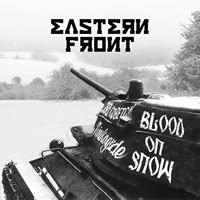 I saw a video of this band and I thought it was some high school project. A bunch of average ability musicians dress up in cliche black metal attire. They probably got their wardrobe ideas by watching GORGOROTH's Black Mass Krakow DVD or even 1349 if they have one out. Next up they play the crappiest BM song their childish as well as ignorant minds could come with while their vocalist just screams into the mic. Who needs lyrics I mean most outsiders don't even know that Black Metal actually has lyrics. Finally they get some indie nerd to film their performance then afterwards they add in stock WW2 footage to make it really cool. Hey war is cool but to really be edgy they use German footage. They'll also call themselves in the fake band EASTERN FRONT because that's the type of WW2video footage the indie nerd could get his hands on. I'm guessing they got an honorable mention. Now how surprised I was to find out that it was not some piss poor school project going on. That was an honest to hell video by a piss poor bunch of Brits who actually do call themselves EASTERN FRONT.

Blood On Snow is their debut and it's war themed in the song title department. They concentrate on the eastern campaign between the Soviets and the Germans. Even though I consider this a complete joke of a release. I have to feel sorry for this band because where will they go next? Your name is EASTERN FRONT and your debut album covers that particular chapter of history. Now what, do you wipe off the clown make up and head back to art school? Maybe change your name to D-DAY and work on a new album? Sure I'm making light of this band's creative accomplishment because they've cheapened what others have been doing far longer and better. I'm not just holding this to the BM genre (although MARDUK would be my first choice) but in the past few years there have been some incredible war themed releases by Death Metal bands like HAIL OF BULLETS and GOD DETHRONED. England's own BOLT THROWER are warmongers in their own right. Also EASTERN FRONT musically do not hold themselves religiously to the blackened template on here. I'm guessing these guys were in failed deathcore bands before and are now trying this black metal shtick.