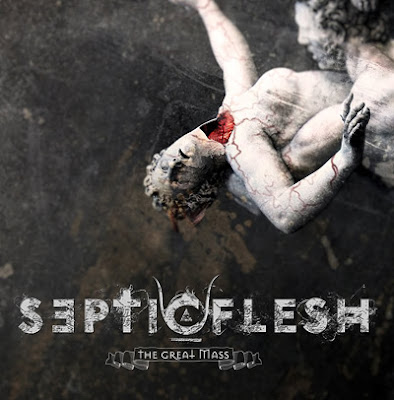 Earlier this year when the single, which is also the album's opening cut, "The Vampire from Nazareth" was released I thought holy shit it's a symphonic version of BEHEMOTH. How ironic since the last time I saw them was with BEHEMOTH back in January of 2010. Now that I've got the whole release I'm kinda disappointed. Not that they sound or don't sound like a symphonic BEHEMOTH, who would want that. I just have to say that this opera metal thing has gone too far. Their comeback release from 2008, Communion, had the symphonic element going for it as well but that was more like a surprise. The Great Mass is more of an operatic funeral. Included on here with Greece's filthy four are another 80 musicians and 32 singers better known as the Prague Philharmonic Orchestra. Did they have to borrow them from DIMMU BORGIR? Obviously credit must be given to guitarist and now big time composer Christos Antoniou wrote the orchestra parts for this first, which were then recorded one section at a time and finally put together with the band in the studio. The result is definitely a metal symphonic opus and obviously sounding better than that last release by DIMMU but not by much. I wouldn't go as far to say that this was another forty sum minutes of my life that I will never get back. That already happened last month six or seven times and I was hoping to go a few weeks before it happened again.

The problem I have with The Great Mass, as well as all releases that contain orchestrated symphonics, is that the massive orchestra overwhelms the metallic portions to the point where you ask why bother calling this metal at all. When there's room enough for the actual band to perform it sounds like commercial pop metal as on "Pyramid God". While on "A Great Mass of Death" it just goes too far into the operatic even including a fat lady adding some vocals. There's some other vocal additions on here which had me scratching my headache ridden skull. Why am I hearing post punk techno goth fag vocals, even if they are few and far between, on a SEPTICFLESH release? "Therianthropy"? You must be fuckin kidding me? Look everything on here is not total crap. "Five-Pointed Star" is fairly decent for part of it. I thought the orchestra was on a union required break but of course I was wrong. Even with them in tow the song works well with a decent blend of explosive melodic death metal and the symphonics. The steel-and-brass death march ending was a nice touch. "Oceans of Gray" has a cool gothic doom atmosphere to it. "The Undead Keep Dreaming" is probably the most interesting cut on here since it pairs up the blackened guitar melodies and throaty growls with the symphonics well. Other than that I pretty much had it with this.