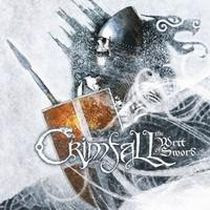 This Finnish band came out of their homeland's cold wilderness in 2009 and unleashed the amazing debut As the Path Unfolds which was on Napalm Records. Now here we are a few years later and the band's sophomore effort is on a different label albeit their homeland's label. Getting right to the point what makes CRIMFALL a step above their genre counterparts is that their sound is simply mesmerizing with power and yet tastefully inter weaved with a melodic beauty. First off they have pretty much mastered the art of the "beauty and the beast" duel vocal style. Helena Haaparanta has an exciting voice which is not false operatic or quietly folky. She just sounds like this powerful woman of the land. Mikki Hakkinen is a true growling beast who should be doing voice overs in horror films. Musically The Writ of Sword is a far more powerful in it's composition and has a colder presence to it as if you are out in a sub Arctic landscape. That's to be expected since this one starts off with the intro "Dicembre" where as their debut ended with "Novembre". Of course whenever the sound scapes start giving you the chills it's Helena's vocal parts which come in right at the times when you wanna come in from the cold. Musically the symphonics and the folk presence is never over done to the point where the guitars, bass and drums are buried as if under ice. To me this is not a release with separate songs. The Writ of Sword is definitely a soundtrack which you place in your stereo, push play and find a comfortable place to relax while you wait for Winter. Personally I'm kinda torn between which atmosphere this band has so far done be it the warmer debut or this the frosty follow up. Obviously Spring is next but we won't see that, as far as this band's release timeline goes, for two more years.