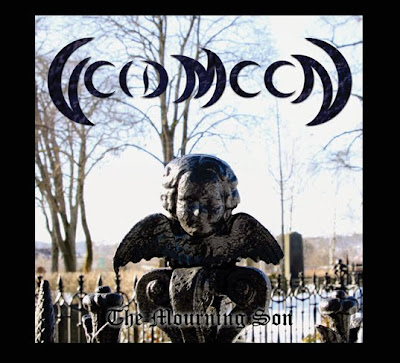 When this came in to check out I was expecting some traditional Doom from this Swedish three piece. After hearing the opening title track I was like "whoa, we are not exactly in traditional Swedish Doom territory on here." This is the latest release by VOID MOON but they also have another demo and a four song 7"er out on Metalbound but I'm sure it's available from the band as well through their website. Both of those are from 2010 and just as decent as this new one. The band might be new but two of it's members bassist Peter Svensson and drummer Thomas Hedlund have a laundry list of former bands that stretches back to the 1990s. The Mourning Son is just four tracks one of which is an instrumental, "Cathedral Parkway Revisited", which is a haunting little repetitive ditty. As far as the other tracks what shocks you out of any jaded misconceptions is vocalist/guitarist Jonas Gustavsson. This guy has an incredible Hard Rock/Heavy Metal sounding voice. Hell hand over the guitar to someone else and let this guy stand behind the mic and wail. Just a suggestion but seriously on the opener "The Mourning Son" he's amazing. The guy needs to be on stage at Wacken with a voice like that. Musically for the most part the song plays in a simple traditional Doom structure but slowly evolves into something which reminded me of classic 80's Metal, not in a bad way of course. The second cut "Cyclops" starts out like a melodic ballad but then reverts into a massive headbanger with a thick riff worthy of throwing up the horns to. The final cut "Madman" is Doooooom! It's a tremendous cut done in a gloomy fashion with an added psych damaged solo in it's beginning and once again Gustavsson's amazing vocals. I'd lay down money that these guys will be big and soon since they mix Doom and classic sounding Metal well. Hopefully some label representative will agree.