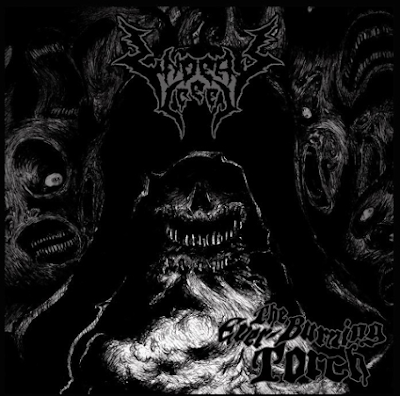 Here's an band from Palermo, Sicily playing Death Metal as if they hailed from Sweden circa 1991. UNDEAD CREEP are part of the sweeping wave of new bands in the death metal world who are not bowing down to the progressive or mainstream watered down taste makers of the modern metal media. They are championing old school death metal as if it was an ancient religion. UNDEAD CREEP started back in 2009 which is right about when this whole old school death metal revival thing (OSDM for short) started to rear it's ugly head. That year the band released an amazing demo which has also been tacked onto the end of this their ten song debut full length. After first listening to The Ever-Burning Torch it's obvious that these guys take their influences from Swedish Death Metal legends DISMEMBER and ENTOMBED. Hey if you're going to follow the left hand path you might as well keep things authentic. UNDEAD CREEP do just that by displaying a menacing atmosphere on here that jumps right out at you at certain times while other instances it creeps up for the kill at a death doom pace. A detail on all the cuts is not needed since it's OSDM so you either like it or not, I like it.