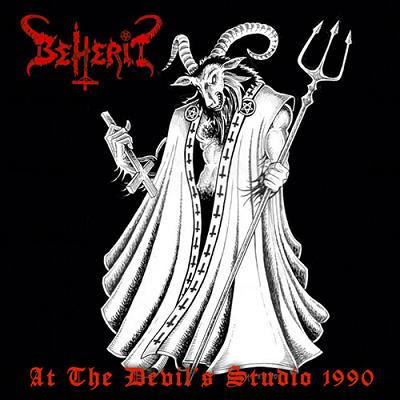 Are you worthy? I repeat are you worthy? Well if you're reading SFM666 then you are. You'll also know that I praise the perverse, obscene and Satanic works of Finnish Black Metal on a regular basis. What we have here is literally an unearthed gem as it were. BEHERIT's drummer Sodomatic Slaughter had this master tape in his possession for the last 20 fuckin years and it's now finally seeing the light of day of course after it was re-mastered last year. This is the first official BEHERIT studio album which was recorded live in the studio by Nuclear Holocausto Vengeance and Sodomatic Slaughter back in 1990 in Ala Ky Studio, Rovaniemi. Obviously it's a little worn and rough as far as production values go. It does make Drawing Down the Moon sound polished if you know what I mean and if you are a BEHERIT fan you do. Now everyone and their basement dwelling, black metal forum addict cousin knows that The Oath of Black Blood release is a compilation of the band's early demos plus the Dawn of Satan's Millennium 7"er. That was the standard for BEHERIT's early rottenness. At The Devil's Studio 1990 is the real debut album but it was scrapped because the band had problems with their label then Turbo Music. So now here it is in all of it's disgusting filth along with two previously unreleased tracks. Unless you are a BEHERIT fan or at least a cult collector of pre-production values Black Metal (first & second waves) then I say stay away from this. For you others this will be a feast of sorts with it's chaotic minimalism working through some familiar cuts like "Demonomancy", "Witchcraft" and "The Oath of Black Blood". You'll be reminded how well this band was influenced by HELLHAMMER as opposed to their Norwegian counterparts at the time MAYHEM. You have been warned.