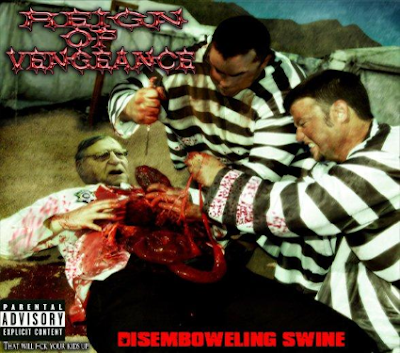 This Scottsdale, Arizona act must have spent plenty of time watching gore horror films with the sound turned down while listening to copious amounts of MACABRE. Seconds into the opening title track I immediately thought of MACABRE and as it turned out this whole release is one big worship fest, albeit a bloody one, to MACABRE. Other than the previous worshipping scenario this band is also obsessed with murder. I thought Scottsdale, Arizona was a retirement community where senior citizens go to spend their final years in the dry heat. REIGN OF VENGEANCE makes the place sound like murder city. There's something to remember when I plan my retirement. As far as Disemboweling Swine goes this is mostly slow paced death metal sliced and diced in a brutal way or should I say "brootal" That and all of the eclectic elements; backing high pitched screams, jazzy bass soloing, clean vocal shouts, tossed in display the MACABRE influence. Once in a while they will show some GoreGrind speed, toss in a Deathcore breakdown or two but for the most part it's a slow ride. Overall it's like the sick twisted thoughts of some guy abandoned in the desert by enemies and he's thinking of all the horrible ways of vengeance he'll perform on them as well as all humanity if he lives long enough to get to civilization. Sounds like a great concept for an album and strangely enough Disemboweling Swine sounds some what conceptual. Unfortunately most of what this band does drags more ass than a Gila monster with an anvil tied to it's tail. Blood drains faster than the momentum this band displays on here, trust me I know. Also according to some recent promo info they're now looking for a new drummer. Hmmm I wonder what happened to their previous one? When you go out searching in the desert look for the buzzards circling, trust me I know about that too.