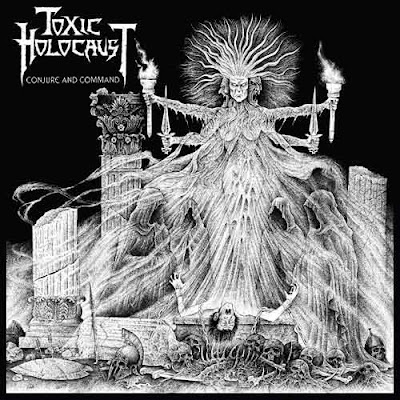 To say that this was not a highly anticipated release for 2011, that's if you like extreme metal of course, would be a lie. Mainman Joel Grind had set the standard for great no bullshit straight up speed metal/thrash for a decade. One thing people seem to forget is that he was pumping out music long before someone came up with the idea that Thrash was making a comeback. Now although he's only put out four full lengths in a little over ten years he's also managed to put out thirteen minor releases as well as a live album and a comp. To say he's prolific is an understatement and he was doing it all on his own as in the one man band way. On some stuff he had a session drummer and live he has hired guns for bass and drum duties. I didn't get into TOXIC HOLOCAUST until he had already made a name for himself in the underground but I'll say this, out of his three previous full lengths the last two, 2005's Hell on Earth and An Overdose of Death from 2008, are must haves for any Thrash maniac. Better yet if you like metal then you should have em in your collection. So when coming to this one I was expecting more of the same from Joel Grind. I was wrong since this is better then I expected since there's some slight changes all for the better.


First thing different is that TOXIC HOLOCAUST is an actual band now since Grind has enlisted a bassist in Phil Zeller and a drummer Nick Bellmore. Musicianship wise there's not much of a difference but I'm sure having a rhythm section took some of the weight off of the man's shoulders to concentrate more on his guitar work and vocals. Musically there's a difference from the past releases and that's the added proto Death Metal sound on a lot of these cuts. This is like POSSESSED, VENOM, DESTRUCTION and DECEASED all rolled into one thick punch. In the past there was a Punk Metal hybrid thing going on but now it's strictly thick metallic riffs played with a driving intensity. Grind's blackened vocals (kinda reminds ya of Cronos at times) are even more sadistic then before. There's plenty of slash and burn thrashers like opener "Judgment Awaits You", "Bitch" and "In the Depths (of Your Mind)" to name a few. What I found outstanding were some of the twisted cuts like the death and roll catchiness of "The Liars Are Burning" (they have to make a video for this one) and the death crawl of "I Am Disease". The last cut on here, "Sound the Charge" is probably the most punk influenced. To just call this another great Thrash release would be a disservice if not an all out insult. Joel Grind has actually progressed beyond those boundries and he's better for it. This is one of the best thirty two minutes of 2011.