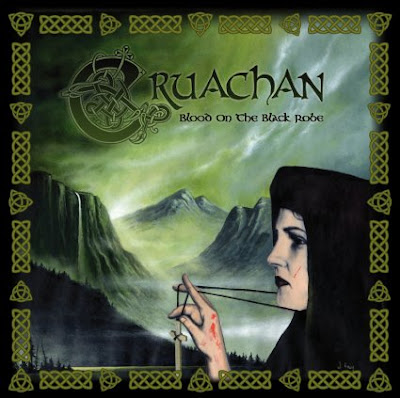 Last time I reviewed one of this Irish band's releases, The Morrigan’s Call, they had a female singer handling some of the vocals. Well now that she, Karen Gilligan, is not a full time member anymore the rest of the band has moved back a few paces, or albums if you prefer, to their earlier style. How far back you ask? Well before the Renaissance Fair style took hold with Karen Gilligan, their debut release from 1995 Tuatha Na Gael was Celtic Black Metal. I'm not saying Blood on the Black Robe is an exact replica but CRUACHAN seem to have washed their hands of a lot of hokey elements they've used to afford Gilligan her place in the band. How is that going to work with their fans? Well let's see, in 2006 they were on Karmageddon and now they're on Candlelight. Now if you see a problem with that then I suggest you go back to your LACUNA COIL collection and fuck off. As for me I'll take it because Blood on the Black Robe is a very good release.

For you Irish Folk aficionados there's plenty of flutes, whistles, and fiddle playing to keep your sainted grandmother happy. For the rest of us the extreme tendencies this band always had but kept bridled have now been set free. Vocalist Keith Fay sounds down right pissed and he's singing as well as playing guitar in a metal band. Most of the songs on here are aggressive in a blackened pagan battle metal sense. They toss a few bones to the past with an instrumental and let Gilligan back in to add some female vocals, if that's really her. As far as the album as a whole there is a cohesiveness on here with the metal and folk elements that I believe their past releases lacked. You figure after fifteen or sixteen years they would finally put something out that nailed the formula. If there is something about this which will hinder them it's that they've gone from one cliche to another.

Remember this band's history which is that they put out a decent Celtic Black Metal album out in 1995 then soon afterwards split up. A few years later they reformed and added Gilligan to soften the harsh tones. It worked because back in 2000 the type of music they were creating, Celtic Folk Metal, was still somewhat fresh. Over the years they went a little too far into the Ren Fairy thing but that was alright since suddenly everyone and their sister was trying to do the same thing. So here there they were standing in a crowd of Celtic Folk Metal bands with male and female vocalists. Now they dropped the woman but are still standing in a crowd of Celtic Folk Metal bands with a male vocalist. The only thing they have going for em is that they are Celtic.