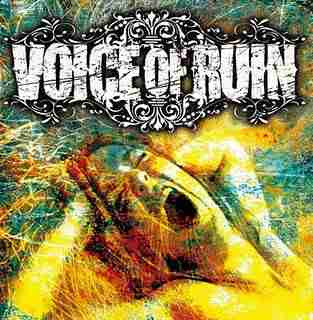 I like it when a band starts off their release by simply attacking the listener. You push play and without any warning or atmospheric opening the music hits you like a runaway truck. Next you have a singer who is simply screaming in your face. That's what it's like on this band's opener "Dependances", plus the guy is screaming at you in French so it's even better. VOICE OF RUIN are actually from Switzerland and the opening cut is the only one sung in French, the rest are in English. Also along with screams and angry yet clean vocals their singer also adds plenty of animalistic death grunting. These damm Swiss are pissed and crushing as well. VOICE OF RUIN's sound is running around in a mosh pit of Deathcore and Thrash grooves. Songs like "Show Your Respect", "Win or Die" and my favorite "Free Hate" make it clear what their musical intentions are and how it's supposed to influence the listener. After I finished blasting this the first time I then went next door and punched out my neighbor. So does the world of Extreme Metal need another At the Breakdown type of band? Sure why not since they sound better than their contemporaries here in the US. Their music is brutality with the complexity of a baseball bat wrapped with barbed wire which they beat you with. Then again that could be the riffs pummeling you into the floor. VOICE OF RUIN seem to have found that niche where they supply enough death thrash to overcome the generic "core" type elements which bog down bands in this genre. "My Obsession" is a perfect example of the effect. Dance with your fists up to this one.