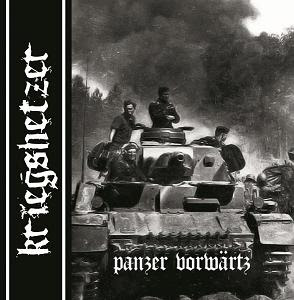 One of the problems I have with the mainstream music media (one of many actually) is that some like to call themselves "extreme" but when a band comes along say for example this one from the Ukraine they shun them. 99.9% of the mags as well as websites who say they're into black metal are really only into the Halloween aspect or the safe sedate offshoots of it. Whenever something or someone comes along that's truly evil, mean and nasty they run like sheep when the wolf has entered their field of hipsterdom. Bands like KRIEGSHETZER are just too real for them to be around let alone say something good about em. So these music media scribes either shun their existence or try to be-little them. The fact of the matter is that these scribes expose themselves as being phonies whenever they point out that they "like black metal but not that type of black metal." What those people mean by "that type of black metal" is NSBM or National Socialist Black Metal. Pardon me but since when did Black Metal start espousing the virtues of tolerance? Black Metal is the most intolerant genre around and that's a good thing. You don't have to agree with it but to not acknowledge it's existence let alone the fierce quality of their compositions is to be a coward.

So that's my putting the phonies into their places moment for the month now onto the music. Like I said KRIEGSHETZER are from the Ukraine but their name means "warmonger" in German. All lyrics are in German as well, ha go figure. Want an even better laugh? The band uses the lyrics of old German Landser-songs, from World War Two. Musically their BM style is simple and straight forward. They dish out plenty of blast beats, aggressive tremolo riffs on a guitar tuned to the key of a pissed off wasp's nest. There's even some bloody throated vocals which could be construed as battle commands but that would be stretching it. Being just short of fifty minutes of relentless war like metal without much of a diversion is also stretching the limits of enjoyment. This duo of Anders on guitars and vocals plus Taragorm on drums does add some tempo changes throughout which keeps things from being monotonous. However it is a very long war.