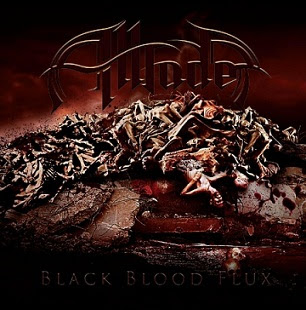 From what I gather this Norwegian band use to be more into black metal but that was half a decade ago (their debut, At Least We Will Die Together, came out in 2006) and now they're back with a nicer more accessible sound. Some of their cuts on here sound like they could be throwaways by their peers. I'm not going to drop any names out there but let's just say one of em is a battle hardened melodic death metal band from Sweden. Frankly I'm surprised this came out on Osmose since it sounds like some third rate act Century Media would have put out. Technically most of the material on Black Blood Flux is decent but to hell with it, I'll say it then. A blackened AMON AMARTH is what this sounds like. Now even though that last AMON AMARTH release was pure plastic, soulless garbage only suitable for hipsters, who maligned em for over a decade and are now into that whole new (ahem?) Viking thing. That doesn't mean a facsimile can come along and step into their boots. After being totally bored with this one I looked for their first album and what a difference five fuckin years makes. That one is actually pretty good but this is kinda boring.