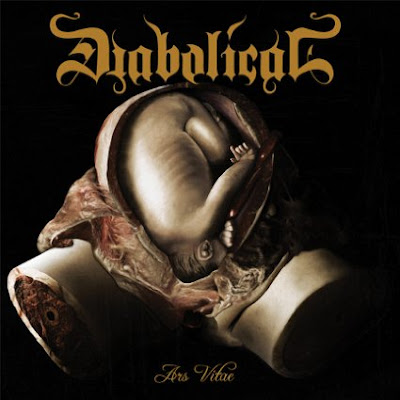 Most of the time I never bother to copy what is written in a release's promo material but for this instance I'll make an exception. "For 15 years already, DIABOLICAL have caused confusion among the narrow-minded, constantly progressing, refusing to do the expected." Now with all do respect for this Swedish institution and it's vocalist/guitarist mainman Sverker "Widda" Widgren. I don't find what they're doing on this release all that confusing. DIABOLICAL are Melodic Death Metal albeit extremely technical. As far as their refusing to do the expected well that might be the reason why after 15 years they're not a household name. Then again that depends if it's the household of an ex-bandmate since with the except for Widgren the line-up has been a revolving door from the band's beginnings in the late 90s. It's only been the past few years that one would call what they have as steady. When it comes to their talent I believe it to be unquestionable. For a fact finding reference check out 2008's The Gallery of Bleeding Art which is an unheralded classic. It's their high water mark but if you're a fan expecting something new here with this release then you might be disappointed. Since Widgren has been busy twisting the knobs at his studio along with working in his other band DEMONICAL, Ars Vitae is basically a compilation for fans in need of a fix to hold em over.

There is some newer material on this release starting off with the Eye single from 2010. These four cuts represent Widgren once again taking the band in a slightly different direction. The opener "Ortus" is a simple atmospheric intro which have become obligatory these days. "Sightless 6" is more of a savage blackened death cut which breaks into a somber note at various times throughout it's six plus minute length. "Infvitabile Fatum" is another atmospheric piece with clean sounding guitar teamed up with a back drop of synthesizers which drone on until finally bleeding into the forceful "Eye". Once again the song is steeped in blackened death similar to what BELPHEGOR has been cranking out of late albeit more of a melodic strain. As far as an inside look to what the future will bring Widgren has definitely made things interesting. After the inside peak there's a decent live set featuring material from all the band's three full lengths. Finally this dink ends with the band's "Deserts of Desolation" CDEP from 2000. Personally I thought these four songs were incredible not because they're ahead of their time but it's the opposite. These songs illustrate how DIABOLICAL started out as a less technical more Thrash influenced act plus the damm thing was sold out a long time ago. All in all this is definitely a "for the fans" release but for someone who has never got into this band before I believe it's a decent place to start.