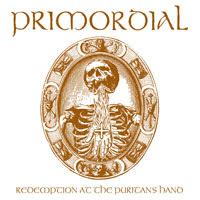 Sadly this has been sitting around since late April. I hadn't gone near it out of fear, seriously. You have to remember that this Irish band has released five incredible full lengths in a row, starting with 1998's A Journey's End and last with To the Nameless Dead in 2007. Their debut, Imrama, from 1995 wasn't so bad either. The band was on a roll putting great release after great release out but this one here took four years to appear which is longer than their usual release schedule. So here I am finally taking in all of their Celtic Folk mixed with epic blackened melodies on this new one and it didn't knock me back this time around. Redemption At The Puritan's Hand is a good release but in the past when I first listened to one of their releases I was automatically blown away. The opening cuts on those releases always exploded forth as if an army had charged out from the treeline screaming a battle cry that would send a chilling fright through the ranks of all those who opposed them. The first cut on here, "No Grave Deep Enough", is something which you might've found deep within a release of their's in the past. It's good just not amazing.

Strangely enough Redemption At The Puritan's Hand does sound like it's a step back for the band again not in a bad way but as if to rekindle some ancient wood from their past releases. I did not look at any pre-release material about this new one or read any interviews with the band. I pretty much wanted to keep all pre-conceived ideas away so the music would release itself like a storm. The second cut “Lain with the Wolf” is pretty good even with it's close to two minutes of build up riffs and then A.A. Nemtheanga's lets loose with his signature wail. The majesty of the guitars soar forth but never all the way through. Instead of epicness Redemption At The Puritan's Hand is a more dark brooding affair. The guitars really don't bite and the drumming sounds sloppy. "Bloodied Yet Unbowed" has a decent soft build up which turns into a dream scape atmosphere until finally charging forth with some power. Normally I have to turn the volume down a notch with PRIMORDIAL but on here it's the opposite. Something else different is that in the past I would look at one of this band's releases as a whole great body of work. This one is merely a collection of cuts, some fairly decent as well as memorable. You might even have some of them bouncing in your head for a week after playing this. Although I did say some of them like the just mentioned "Bloodied Yet Unbowed".

"God's Old Snake" is another great cut, a little faster, where the musicianship is good but mixed weird. On here the drums are up front of the riffs but A.A. Nemtheanga sounds for the most part like the song's namesake till the near end when he reverts back to clean vocals. Great clean sounding middle eastern flavored solo to close it. "The Mouth of Judas" is an extremely tragic sounding doom excursion since it's missing that treble-laden dynamic from guitarists Ciaran MacUiliam and Micheal O'Floinn. Nemtheanga sounds laid back at first but ends it with characteristic aggressive vocals. On "The Black Hundred" the band redeems themselves with another fast track with Nemtheanga going guttural some of the time as if he's singing through gulps of blood. The title track as well as the closer, "Death of the Gods", were both surprisingly forgettable which pissed me off. The latter one more of a traditional Celtic melody which could have been kicked a few notches up from what this band has been known to do before, but not on here. In the end it's a good record but I'll probably enjoy some of these new cuts better live then I did on here.