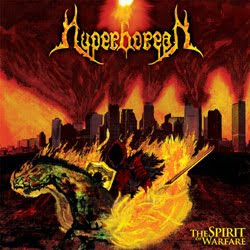 Melodic black metal has become so similar in sound and style that it's tough for any new acts to stand out. This Swedish band suffers the same fate which is sad since they've been around since 2002. They did take a break for a few years but then reconvened to record this one. This release is their debut full length after releasing a handful of demos over their career. Just to add insult to injury this was recorded back in 2009 and hasn't seen the proper light of day till now. As far as trying to access a body of work this becomes more like looking for a needle in a haystack without getting bored. The songs on The Spirit of Warfare are fairly laid back, the production is monotone and except for a few moments when keyboards are added this is quite sterile. I'm still questioning the decision to call it black metal since I have a few other choice words lingering about.