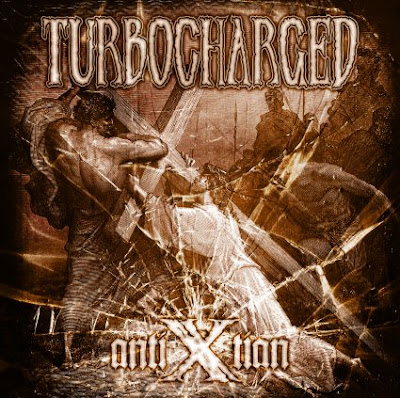 Once I saw that this was Ronnie Ripper Olson's latest musical project I knew it was going to good. For those of you who are not up to speed, Ronnie Ripper was once vocalist for VOMITORY and technically he's still playing bass for blackened thrash punk scum rockers GEHENNAH. Back in 2008 TURBOCHARGED released their Branded Forever demo which contained a damm good cover of G.G. ALLIN's "You Hate Me and I Hate You". I think they also did a SODOM cover as well. Anyway from what I gather this originally came out as a demo in 2010 which also had a VENOM cover, "Witching Hour" on it. From there it was released on vinyl in late December on some Polish label and now here it is on CD with different cover artwork. Along with Ronnie, vocals/bassist, there's drummer Freddie Fister and Old Nick on guitar. This Swedish trio is doing something which is not so far from what Ronnie was involved in with GEHENNAH. This time around it all sounds like a more metal version of certain Confederacy of Scum bands like LIMECELL or ANTISEEN. In fact Ronnie sounds a lot like Jeff Clayton from ANTISEEN on here.

If you haven't figured it out by the title, this full length is all about anti christianity strung up with some scum punk attitude and metal elements like Hardcore and Thrash. The songs do alternate with one style be it punk or metal which dominates the structure. For example the title cut is more of a simple scum punk number with gang shouts to get the crowd into it. In fact there's a lot of gang shout songs on here. Where as "Ghetto of Eden" is a full on thrasher, the same with "Nekronobodies". All of it is damm good but I'm guessing those into the scum punk side of things will find this more to their liking than any typical thrash fan. That's because the more memorable tracks on here are full of scum punk style chord selections like the very impressive "Golgotha 33 A.D" and the borderline thrash of "Species of Jesus". Old Nick might not be pulling out solos and riffs on here to the standards set by Trey Azagthoth fans but to a bunch of crazed, leather clad scum punks he'll be a guitar god. That's why this release deserves top honors since in it's own right it stands unbowed, unabashed and would be great to play on a Sunday afternoon.