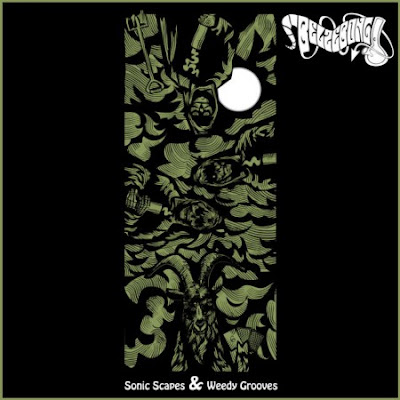 The Poles got their metal blackness & deathness now they're getting on their stoner grooves so all hail the horned bong from outer space or Kielce, Poland whichever is closer to you. Although what these four Poles do with their four cuts, all instrumentals with some movie samples tossed in, is nothing new if you're a fan of BONGZILLA, WEEDEATER or BONGRIPPER. But that's not to say it isn't enjoyable. Opener "Bong Thrower" is a mello space jam for the totally spaced out. "Names of the Devil" has a decent bass intro which will thud you out of your haze. BELZEBONG like their distortion and fuzz way up there too. "Witch Rider" comes off like a car driving song for a movie with the opening scene being a black van cruising down the highway as the credits roll by. If Quentin Tarantino is reading this then I've got plenty more ideas for a totally cool Stoner Doom themed movie, call me. The last cut "Acid Funeral" is the bad trip vibe which had me thinking ELECTRIC WIZARD gets played in Poland a lot. What's strange is that the other day I was thinking about this local band from my area called RISE who years ago in the late 90s also did the stoner instrumental thing. Coincidence? Maybe and as well as this band is on four cuts I'd have to say an album's worth would bore the fuck out of me. But who knows and then maybe just maybe some clown will come up with another new subgenre of metal called Bong Metal which is just as stupid as Beard Metal but what do you expect from stoners.