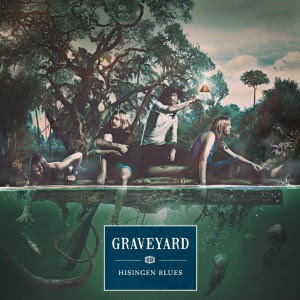 Scandinavian musicians have always been able to take certain American or English 70's rock music influences, re-shape em into their own and then sell it back to listeners in the country's of origin. It's not a bad thing in fact a lot of it (UNION CARBIDE PRODUCTIONS, HELLACOPTERS, NOMADS, etc.) have done some good shit. The important key is that no one with an ounce of self respect at the time, late 80's/early 90's, was trying to rewrite musical history when writing about these bands. I include myself in that category since I started into writing and publishing back in 1987. Those of us with keen ears and actual memories of the 70's music era (reading about it doesn't count) know the deal. We simply considered it retro which was either good, bad or bandwagon jumping copycat bullshit. Unfortunately nowadays you have this contingent of revisionists in the musical media, be they in print or on websites, who insist this is not merely recycled rock. Case in point, these prolific liars have recently decided that mediocre 70's hard rock was actually "proto doom". In all honesty there was only one band who were influential to those future acts who would later be categorized as Doom and that was SABBATH. Lets cut the fuckin crap and admit that all roads to Doom started with SABBATH. Even those early bands who are now considered the godfathers of Doom aka: TROUBLE, PENTAGRAM and SAINT VITUS can all cite SABBATH as their main influence, not LED ZEP, not BLACK WIDOW, not BUFFALO or SIR LORD BALTIMORE. I know of a download website were the creator makes comp CDs filled with obscure late 60's heavy psych/early to mid 70's hard rock bands and calls it all proto doom. Hey look some of those bands had a few cool songs but most of it sucked then and still sucks now. I see writers on Doom sites constantly use the words "proto doom". Now there's a fine way to sell some crappy records on Ebay. There are also labels who see how hipster retards have jumped onto the doom/stoner/sludge bandwagon and are now releasing products to cator to their cash. Obviously you should never believe everything you read on the Internet except that Pistachio nuts are the lowest fat nut, you can find anything at WALMART even a dead body, liberals really do hate black people and I have a bullshit detector that allows me to destroy revisionists.


Now after my psuedo op/ed on musical revisionism I give you GRAVEYARD from Gothenburg, Sweden. The band came about when a mediocre Swedish doom outfit named NORRSKEN split up in 2000. That gave birth to two new bands one of them was WITCHCRAFT, another 70's retro act, which was created by former NORRSKEN guitarist Magnus Pelander. The rest of the ex-band members went on to form ALBATROS which after half a decade failed to do anything so the next step was to create GRAVEYARD from it's ashes. The band membership got revamped and as luck, or Myspace self promotion, would have it. They got signed by Tee Pee Records. This is were my introduction to them came back in 2008 with their self titled debut on Tee Pee Records. Back then I was still writing about Punk, Garage and Psych bands and I'm still a fan of the BRIAN JONESTOWN MASSACRE. Tee Pee Records released a great BJM compilation years ago (BJM started out on Bomp Records) plus they also put out various 60s/70's retro rock acts. Since many scribes in the metal music media were former indie rockers, who scored pot from poor inner city negroes off campus, obviously they heard some bands off of Tee Pee Records while still in college listening to their university's radio station. (It's from these college radio losers that psych is now part of the Doom listings of sub genres.) This is no slight against Tee Pee Records since they simply found a way to expand their way into finding a wider audience for their artists to flourish. I've seen their ads in Decibel Magazine. Yeah those writers at "America's Only Extreme Music Magazine" like them some post hippie rock that's why they drop the "Metal" tag every once in a while out of convenience. They, Tee Pee Records, do have (had) some great bands on their label some of whom I do consider metal. Although I believe anyone who gets into the YA HO WA 13 needs to be shot point blank in the face with both barrels of a sawed off shotgun loaded with double odd buckshot. But getting back to GRAVEYARD, I thought their debut was a good attempt at recreating the sounds of second or even third tier mid 70's rock. I have no problem with music revivals since I still own a lot of records by bands from the late 80s/early 90s who have done the same thing be it 60's Garage Rock or Psych. I simply call it what "it" is without the hype.

This one here, Hisingen Blues, is their sophomore effort and I haven't seen a release with this much pre-release hype since ELECTRIC WIZARD's Black Masses. Now there was a huge failure for ya. You don't see many people talking about that one since the clowns who were sucking are still wiping the gunk off of their faces. But getting back to Hisingen Blues, it is simply FM radio classic rock (blues, jazz and folk rock) re-tooled for modern ears who don't listen to classic rock unless they're in a store and it's blared over the intercom system via satellite radio. This band has gotten compared to LED ZEP as far as the blues and folk influences go. But that's more Dave Mason guitar soloing then Jimmy Page. Quickly now witless scribes, go google Dave Mason so you can include his name in your next GRAVEYARD write-up (hype-up actually). Joakim Nilsson's vocals do pay homage to Plant's bluesy croak especially on opener "Ain’t Fit to Live Here" as well as the ballad "Uncomfortably Numb". So do these Swedes play "Communication Breakdown" or even a Willie Dixon cover live as an encore? Maybe not since it would be too obvious since Nilsson's vocal delivery has undergone a change since their debut. In fact that can be said about the music as well. Their 2008 debut might have been decent retro but Hisingen Blues is nothing more than retread. It's a fuckin placebo for the masses carefully crafted for people who were not born yet when "Stairway to Heaven" or "Dyer Maker" were being played on the FM dial every day. That's the main reason why people started snubbing the mainstream AOR snore-fest and discovered underground/alternative sounds. There's nothing wrong with slapping a new coat of paint on an old relic but why choose LED ZEP unless you're shooting for an audience of coffeehouse worms who actually consider SXSW or Rolling Stone magazine the outlets for determining their musical tastes. The simple fact is that this is a celebration in banality. Just because some college radio losers who cite PEARL JAM as their introduction to metal (and still play cornhole in their back yards) like this doesn't mean you or I should. Finally this band or release has absolutely nothing to do with Doom so Fuck Off!