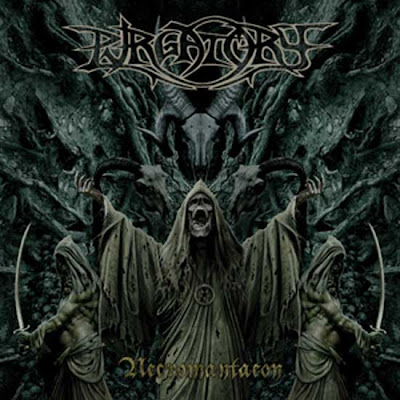 
PURGATORY are an under appreciated death metal institution from Germany who deal in a dark and angry brand of brutality. Nothing new under the sun of course but still credit is due since their riffs are as monsterious as the beast like vocals. Necromantaeon is their sixth full length and unlike some other bands who reach this point in their career, eighteen years, they don't sound like they've mellowed out. You realize that on the opening intro "Arrival of the Undivine" which is not atmospheric but on the contrary quite ferocious. From that point on things get a bit nasty as "Reaping the Diseased" charges out at you like a vengence. For the faint of heart just keep repeating "it's only music, it's only music." Yeah right you'll run because most of the time the songs on here, like "Where Darkness Reigns", give off the fealing like you're being chased by something huge as well as ugly.

It's Dreier’s gutteral growls which give off the embodiment of the beast effect coupled with Lutz's drumming. It's coming to get you with grinding teeth represented by Rene's riffs and Peter's bass lines. "Glorification of the Lightbearer" is a standout track as well since Rene actually gets to let loose a few solos that are not so pedestrian. Once in a while the songs will creep out of the darkness to smother you and that might be the ill defining result after a full listen. I like scary bands like PURGATORY since they not only draw out deep seated fears but they take advantage of em. But about half way through you're kinda wondering if the sheet has been pulled over your face instead of being disenbowled. PURGATORY is great for a few quick kills but the longer it goes the excitement wanes.