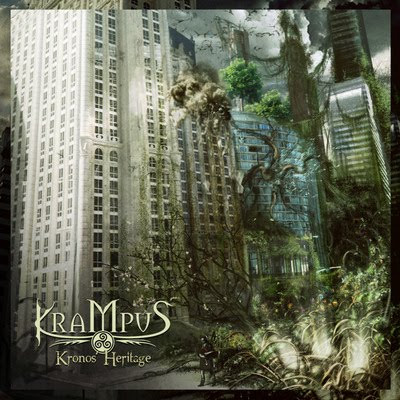 Well I haven't been keeping up with Paganfest this year but it seems that the season of it is way over. Still this folk metal act from Italy would fit in well with that bunch. KRAMPUS is an 8 piece (crowded stage) folk influenced melo death metal band who actually released this in 2010 but I got it now (?) sent in for a once over. It's only three cuts but after one spin I thought it was in the same vein as their northern neighboring genre peers ELUVEITIE. The folk elements are mostly used as a backdrop with an occasional keyboard, violin or flute solo while the metal structure blazes along. As far as the other folk instruments there's bagpipes, whistles and an Irish bouzouki somewhere in the mix. I've seen photos and they're furries like Finland's TURISAS plus they wear warpaint. Still there's a decent melodic tone throughout these three cuts which will please anyone out there looking for another Folk Metal band to blast during your yearly 'I Wanna Be A Warrior" party. At times the vocals can be annoying with the intense screaming added with beast growls. On the opening title cut there's some clean vocals in the chorus. The other cuts sound like they were borrowed from ELUVEITIE. I use to really get into the whole Pagan Folk Metal thing but after so many bands have jumped onto the ship it's lost some of it's original appeal. The key word is "original" which KRAMPUS is far from being but as far as entertaining yeah especially if you just can't get enough.