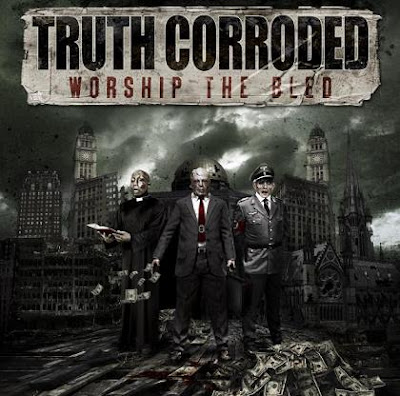 Although this is my first time listening to Australia's TRUTH CORRODED they have been around since the late 90's and have a fairly large catalog of releases including three full lengths prior to this. Musically speaking I'm not a fan of metalcore but I won't let interfere with what this band brings to the table. The first thing I noticed about Worship The Bled is it's uncompromising power which of course is the template factor in "core" metal. Vocalist Jason North has that generic singing style familiar to metalcore which I call the wounded and angry dinosaur scream. You need that to be able to sing over artillery blast like riffs and jackhammer drumming. Something of note is that this band has a re-tooled line-up. Band members, the previously mentioned North, guitarist Mark Lennard and bassist Greg Damon Shaw are joined by new guitarist Darren McLennan who's responsible for the lead work on here. They also have a session drummer Kevin Talley whose also pounded the skins for such core favorites like DAATH, CHIMAIRA and MISERY INDEX. I can honestly say the man is a machine on here plus Talley adds an abundance of fluid leads which almost float above the mayhem created by the others. That's something you notice quickly on the release's second cut "Hunt All Heroes". The opener "Knives of the Betrayed" merely sets the stage with a catchy riff that draws you in. Once inside, each following cut grows with intensity with marginal variation into a huge aggressive monster. Some perfect examples are "Pride of Demise" as well as "The Great Waste of Flesh" both of which follow that previously mentioned theme. The climax is "Summon Abyss" their over seven minute closer which could be the first ever metalcore epic. Decent release but I'm sure any metalcore fan will call it greatness.