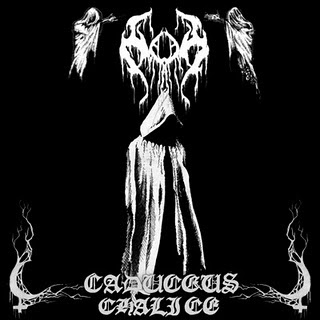 I always wanted to see what a one man black metal act's basement really looks like. I don't have one where I live, the crawl space doesn't count. But I grew up in a house with a fairly large basement and I just can't conceive the idea of recording a black metal album down in one. How could staring at the water heater, some halfway constructed bicycles, dust, cobwebs and a few boxes marked Xmas decorations would influence one to create atmospheric black metal. Obviously these artists must have finished basements with carpeting and walled in rooms. A basement in Australia is where Miasmyr recorded this which was first released on a limited edition cassette through the Dutch label, Wolfsvuur Records back in February 2010. Now it has been re-released by the good people (very good black metal people) at Moribund Records. Miasmyr (aka Paul Marsh) is responsible for all vocals and the instruments played on here (guitar & keyboards as well as programming)

Caduceus Chalice is one of those late night, turn off the lights, press play and close your eyes type of atmospheric black metal releases. The whole idea is to bring about a hypnotic trance like state in which to carry your mind off into the realm of the underworld and it's glorification of darkness. You like that last line about "glorification of darkness"? Well good because I stole it. While listening to this the only real visionary experience I got was watching myself poke my arm with a lite cigarette to stay awake. I wasn't on some astral plane either since I've got the burn marks to prove it. For me this is more background music to scare away things like small creatures that party in the darkness or even kill them. Seriously after listening to the over eighteen minute closer "Chalice" I went outside on my front porch for a breath a cold fresh senses awakening air. I found a dead snake on the steps. It's tail was wrapped around it's own neck as if in self induced strangulation. So this is depressive, suicidal and freaky to say the least.

Caduceus Chalice is also a tour de force in low fi production standards, as if that was going to be a surprise. Miasmyr relies heavily on the keyboards for most of this. When the guitars are employed it's in that pissed off hornet's nest variety. The vocals sound as if he was screaming from upstairs, maybe even through the floor boards. All in all I think if you're a fan of this style then here ya go as long as you remember that it ain't kvlt unless it sounds like shit motto. But in all seriousness one would think that in this day and age of technology the production on here could be much better. Others have done it quite well. Secondly since Miasmyr is not a black metal newcomer (he's played in several black metal outfits in Australia since 1999) one would think he knows there's a fine line between creating an audio transcendental landscape and inducing sleep with consistently boring drone. If there's a future for MOON then it's got to be better than this one.