THE COMPANY CORVETTE - The End of Summers CD review 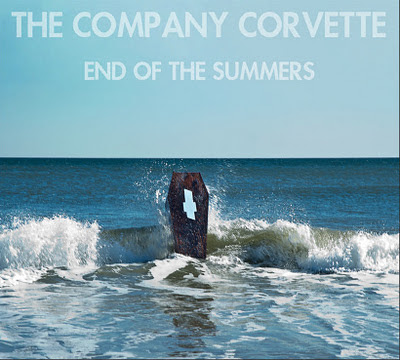 THE COMPANY CORVETTE - The End of Summers CD


Hailing from Philadelphia, PA, which everyone knows I like to call Hostile City, USA, comes this stoner rock trio who drive home the "rock" structure more than the "do bongs" mentality. Seriously it's 2012, the supposed end of days according to the Mayans (who are dead you know but at least left behind some cool swimsuit calenders) so who really wants to be all wasted? Not me because if the end is near then I wanna rock the fuck out. That's what is in store for you on The End of Summers. (aptly titled ain't it?) Also THE COMPANY CORVETTE answers the question that has boggled minds of many people in the underground music scene for two decades now. That question being, what would SOCIAL DISTORTION sound like if they played stoner rock?


THE COMPANY CORVETTE are definitely not burning a new path through the stoner rock swamp of mud stuck artists. Their sound is basically blues based 70's rock with enough added psych damage and metallic k.o. clout to keep it dangerous. What stands out, for me at least, is that it does have a fresh exciting sound going for it that the underground should not be able to contain. In other words these songs are what you should be hearing blared out on car stereos as the drivers cruise down main street in every city or burg in the good ole USA. I'm talking about heavy groove laden sounds with enough guitar distortion and wah wah peddle overkill to shake dead hippie musicians from the late 60's out of their graves. Songs like "Something New", "One Over", "Bear In Mind" and the epic yet laid back closer "Third I" are not just cool tunes but they grab hold of ya like an invitation to a great party.


Look if you've got around forty five minutes to fuck around with then you can find a spot in your mundane life to inject this coolness into. I got this release from the band over a week ago. At first I thought it was cool then after repeated plays of these eight cuts I was sold on how much this sticks with you afterwards. If these guys weren't playing cool music then they would be the people you would wanna hang out with at a bar. Getting back to something I mentioned earlier, the stoner rock swamp of mud stuck artists. It exists and it's full because of what has gone on for the past few years with people still humping the corpse of SABBATH thinking they're getting off because they're dicking a leg bone. THE COMPANY CORVETTE break away from the same old sound / different city recycle of stoner boredom. I'm sure some other people can name drop similar sounding acts who have tread before this Philly trio decided to embark on this venture. I probably could as well but I won't because at this point in the game why bother. Secondly it would be a disservice to their great work let alone the infectious vibe this release brings about naturally.

Labels: THE COMPANY CORVETTE - The End of Summers CD review