SCUM OPINION Al Jourgensen goes Country and so fuckin what 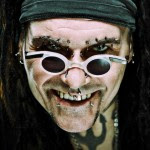 You will not find a review for Bikers Welcome! Ladies Drink Free from the new Al Jourgensen side project, BUCK SATAN AND THE 666 SHOOTERS, here at Scumfeast Metal 666. The main reason being it's not Extreme Music. It's basically Al Jourgensen paying homage to his love of country music which is fine. There isn't a music genre Al hasn't paid homage to in one way or another throughout his career. I'm just going to give my two cents worth on Al, this new project as well as the upcoming new MINISTRY release.


First off when I read that Al was retiring because of health issues I thought that meant for good. At that time I wasn't going to kick the guy when he was down even though I kinda thought it meant buy more of Al's releases. My present opinion of Al is not as high as others in the music media especially the ones in the indie rock loserdom / hipster retard realm. I give the man credit for his early MINISTRY output which left us one good studio album, two if you include the live one. How could we forget this one

After that I think what all else followed was somewhat of a boring joke which is why indie rockers got into it. Look once you go Lolla for Losers you might as well have said to your fanbase "screw you I'd rather play for college radio losers, frat boys and sorority cunts because that's where the money is at." As far as a career move it worked well. You went from being in the pages of underground rags to full color spreads in Rolling Stone, Spin and a few other magazines geared for commercialized human tapeworms with the musical attention span of pigeons. Sure you also tried to keep your underground credibility intact by making various side projects for the underground fans. Unfortunately they only received regular play at Raves and gay bars.


As far as your continued work under the MINISTRY banner well anyone can still find those half ass regurgitated tempo releases in college town record store used bins. Even the half baked, leftist political ideology themed stuff, which some hippie punk politicos gave you credit for at first, has worn thin. (please note Al's next MINISTRY release is going to jump on the whole Occupy bandwagon) The fact of the matter is that in the end your music only found favor with a few sympathetic journalists as well as the cocksuckers of the indie rock media who were just too stupid to realize you were washed up years ago.


So now we have this new one which in undeniably geared towards the modern day crowd of indie rock losers and hipster retards. They might not know that the so-called "Godfather of Industrial Metal" is using an alter ego which was really first used by a guy in the 90s who played acoustic guitar naked save for his cowboy hat, sunglasses and cockroach killer boots. This new release will most likely be praised by those cocksuckers at Pitchfork and Brooklyn Vegan. In all honesty I don't have a problem with that since they're hoovers. They're expected to get on their knees and suck as opposed to extreme music fans who don't.


I can close this by simply saying I don't give a flying fuck who you got on this release to give you some credibility, how well you do country or how many present day Kid Rock or Hank III fans you get to buy this. Your early notoriety was passed over to the lowest form of pop culture maggots and you will never ever return to a status over zero as far as I'm concerned. The last time I had written something good about you, as far as a release review, was in 1989. Obviously I'm gonna keep my legacy intact. I won't be the last sucker.