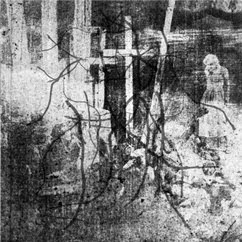 In a nutshell this is basically two guys on guitar playing black metal structured riffs along with adding plenty of feedback and distortion while the third one messes with pro tools on his laptop. Through all of the noise there's somebody screaming as well. All of that comes in three cuts which lasts around thirty minutes. Now I'm sure some other people in the lamestream media could take the sum of this act's parts and write a six or seven hundred word review about this release. (they better since they're being paid eleven cents a word) As for me well I hear things in reality.

I first learned about SUTEKH HEXEN a few years ago when I listened to their two cut Ritualistic demo. At the time I thought it was utter blackness and still do. Larvae follows suit but I just can't get past that musically it's basically noise manipulation. This came in under the heading of raw black metal. Now that's a tough one. There are aspects to SUTEKH HEXEN's sound which reminds me of certain acts in the blackened realm. The difference being that those bands have actual drums, rhythms, vocals, lyrics and of course song structure plus atmosphere. This release has neither although there's plenty of reverb and distortion looped over again and again.

To me this is actually a plasticine version of real music with the electronics, field samples and tape manipulation taking the place of the musicianship. It's why I have a problem with all of this "experimental" or "computerized" metal. Once you strip away everything human than you're left with something soulless. Black Metal or at least dark sounding music is suppose to bring about a sense of fear and foreboding and it's missing here. Some people will lay blame on SUNN O))) for all of this experimentation within the darkened side of the metal genre. But at least on their last one they had Attila doing some vocals and he's one of the best. That put a human face onto the music which was horrific. With this one the only face you get is the Windows logo. How scary is that? Larvae might be good enough for some background music on Halloween but that's until it gets yanked for it's annoyance.

Sorry nothing new but here's something decent.