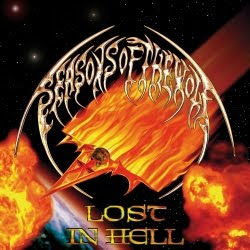 SEASONS OF THE WOLF - Lost in Hell (Double Vinyl) Reissue


Well it's time for the first of many, I'm guessing, reissues to come my way in 2012. Last year it was mostly defunct old school death metal bands having their releases resurrected in order to jump on the whole new OSDM bandwagon. What we have here is a reissue which is far from being trendy. If you're into Gothic tinged metal than this Florida band is probably about as close to you as an old friend. SEASONS OF THE WOLF have never really burst out of their underground status or lair if you will. Their fanbase never cared about that as long as they kept true to their classic sound and as long as singer Wes Waddel didn't lose his voice.


SEASONS OF THE WOLF had their heyday back in the late 90's and early 2000's. They fell silent for a while until 2007 when they released the phenomenal Once in a Blue Moon. There's been talk of a follow-up but that still remains to be seen. What we have here is a reissue of their second full length from 1999. Although opinions vary on which of the band's releases is their absolute best. The previously mentioned release from 2007 as well as 2001's Nocturnal Revelation holding court. It was this album which set them up as part of the underground gothic metal scene. For me Lost In Hell combined Alice Cooper with King Diamond, 70's hard rock with 80's horror metal. It was dark guitar and keyboard driven gothic melodic metal courtesy of Barry "Skully" Waddell and Dennis "Dr. Samuria" Ristow highlighted by Wes Waddel sick high pitched vocals.


This double LP reissue is purely for collector scum as well for pissing off sellers on Ebay. Not only do you get the original album tracks from years ago but this also contains three bonus tracks. It's a gatefold cover which means you tokers can use it to clean your stash. There's my obvious nod to the 70's era of gatefold sleeve usage. Another thing is that this is limited, oh yes excitement city there folks. Everyone who is a collector loves those limited numbered edition releases. That means you have to buy two copies. One to play and one to show off to your envious friends in your smug vinyl collector scum circle. I wouldn't be surprised if some newbies in the doom metal scene cite SEASONS OF THE WOLF as some past great who influenced the present progressive gothic sub scene within the genre ie: GHOST, THE DEVIL'S BLOOD, etc.