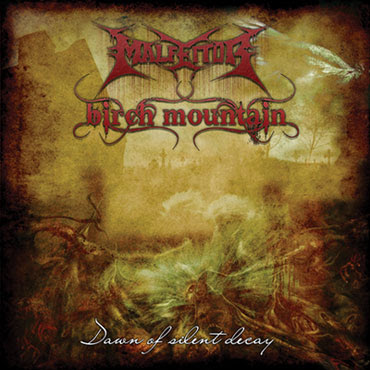 
It seems the overwhelming death metal onslaught from last year has spilled over into 2012. Case in point, this label sent me a split release late last year with two decent bands that were crippling to say the least. Now they're back to show the last one wasn't a fluke. Here we have two Swedish bands that share members as well as intensity. First up is MALFEITOR, a Swedish trio who haven't forgotten that their nation's early signature death metal sound contained some hardcore influence. Then again they shouldn't forget since two of their members, vocalist Mattias Parkkila and guitarist Benny Moberg originally started the band back in 1990 but ended it in 95 to pursue other projects. In 2010 they got MALFEITOR back in gear adding drummer Janne Rudberg Björkenfjäll to the line up.


MALFEITOR's contribution here was culled from their To Hell, Farewell demo which came out in 2011. Musically you get five no nonsense blasts of, dare I say catchy if not infectious, death metal. There's no atmospheric intros, no tech prowess and no bullshit. Obviously these guys have been around long enough to not waste time with faux impressions and just wanna rock the fuck out. They do that well with a rage like attitude as well as crunchy riffs, maniac drumming and ferocious vocals. Speaking of which the vocals almost have a black metal style to them which is cool in my opinion. Songs like "Death The Dead and Me", "To Hell Farewell" and "And the Sky Turned to Rage" latch onto your psyche and stick with you for days on end. Good music will do that.


BIRCH MOUNTAIN is the opposite side of the coin. The band looks like Janne Rudberg Björkenfjäll's side project since he's responsible for the musical duties (guitars, bass and drums) with Mattias Parkkila doing the vocals. These five cuts were also taken from a previous release, BIRCH MOUNTAIN's debut full length Silence is Complete from 2010. The musical style is different with it sounding more like death doom. The song structures contain more melody as well as standout guitar soloing as sharp as ice picks to your ears. Parkkila's vocals on here are also different from what he was doing in MALFEITOR. He sounds more guttural like a beast.


This part of the release is where you relax and let the aggressive rhythms overwhelm ya. While most of it is mid-paced and methodical there are some speedy cuts like “Oriental Battle” which gets your head banging as well as raising the horned fist into the air hailing these Swedes. Overall the pairing of these two acts is brilliant as well as enjoyable from a listener's standpoint. The first part (or in vinyl terms "the first side") is aggressive as well as fun whereas the second part is somewhat contemplative for allowing the music to kick your mind around. If you're going to release a split CD than this is the way to do it. You pair up two acts who complement one another instead of copying or competing against each other.