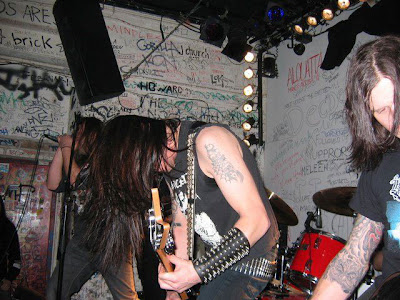 UNCANNY Unveil "The Path of Flesh" From Forthcoming 7"

In October of last year, Swedish death metal veterans UNCANNY entered the studio to record two new songs for a 7" to be released in late January through Dark Descent Records. The first of these songs, "The Path of Flesh." is here below for you to check out. These two tracks are the first new material from Uncanny since 1994's Splenium for Nyktophobia album.

The UNCANNY 2012 line-up consists of:

Formed in Sweden in 1990, UNCANNY released two demos 1's Transportation to the Uncanny and 1992's Nyktalgia), a split release in 1993 with ANCIENT RITES and one full-length in 1994 titled Splenium For Nyktophobia. Earlier this year, Dark Descent Records released all one and a half hours of this classic-era Swedish death metal together on one double-disc package. Like the limited run 3LP Uncanny box set released by The Crypt in 2010, this 2CD is titled MCMXCI - MCMXCIV and features original artwork from Splenium For Nyktophobia as well as artwork from the demo era.