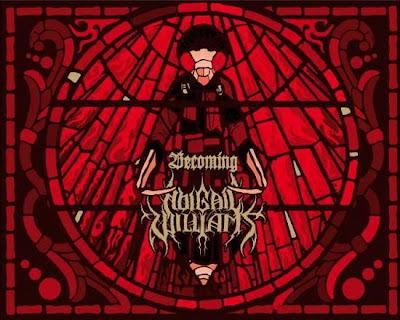 I must admit that as far as this band's previous material goes I was not a fan. If memory serves me I think I called em DIMMU wannabes because they were trying so hard to be symphonic black metal yet it all came over sounding superficial. I even saw them play a show locally and thought them having a female keyboardist as eye candy was pretty much a full on joke. Then again from a business standpoint it worked to get all of the Hot Topic kids to pack the place. Obviously you can't deny this band's success since they're still around after half a decade and on the same big name label. Something else of note is that this band has gone through so many members you would think they were a Swedish black metal act instead of being from the US. Ken Sorceron (guitar and vocals) is the sole remaining body from their beginning stage.


So this is the band's third full length and at first I just wanted to pass on reviewing it. I hate shooting fish in a barrel but I just said fuck it and gave the first song, "Ascension Sickness" a chance. I must say I'm glad I did as well as listening to this whole thing a few times over because musically this band has grown far from their beginnings. In all honesty there's still some coattail riding going on. Sorceron has obviously been blasting some AGALLOCH or WITTR releases in the past few years. The influences showcased on Becoming are far to easy to ignore as far as trends in the genre go. Whether it's the post blackness atmosphere, the doom accents or the so familiar yet pathetically termed "cascadian riffs". This is about as original as a hipster retard. Now with all of that said it's still an enjoyable release.

Sorceron as a composer has found a new blackened niche which he can expand from in order to pursue maybe some original (or as close to it as it gets) material. Becoming consists of six cuts altogether with three of them being long drawn out epic pieces. On the above mentioned opener, "Ascension Sickness", the track starts off with some ambient noise which leads to gentle guitar picking and then after little over a minute in the avalanche of riffs and caustic screams commences. Sure the more cynical listener will make note of the blatant AGALLOCH or WITTR pinching but let's be honest. That last WITTR release was garbage which only got critical acclaim by lessor scribes because of name recognition. As far as AGALLOCH goes well that last one was only harped on because those people never heard their earlier, far more interesting material. So for me ABIGAIL WILLIAMS is here filling the void and producing music that those other two acts failed at.


“Radiance” brings things down into the more cold doom mood relying heavily on the shoe-gaze aesthetics. “Elestial” follows a similar structure and yet Sorceron's vocals display a dismal beauty of bleakness that not liking it might push the guy on the suicide watch. Aside from the opening track which I thought was pretty good the best pieces on Becoming are at it's mid-point and the end. “Infinite Fields of Minds” is where this release's grandiose epicness and EMPEROR influence comes to bare on you. Once again the song starts off with some mild strumming for a little over two minutes. After that everything in Sorceron's arsenal and everyone in the band (please note there's no keyboards on here this time) becomes an artillery battery. You are treated to explosive riffs, asylum screams, melodic and tranquil lead work by guitarist Ian Jekelis (the lone hold over from 2009) as well as a volley of drum beating by in studio drummer Zach Gibson (whose former band I won't name here because I hate them).


What more could you want? Well on the release's finale “Beyond the Veil" Sorceron and company actually surpass all of the previous impact in this over seventeen minute opus. The kitchen sink must not been available so included is some moody folk influenced violin to start things off. From there the guitars soar into flight, minds are lifted into the clouds for contemplative-ness and then at the four minute mark the universe explodes leaving behind galactic dust which forms the outline of a Mayan calender maker smiling while masterful orchestration closes in around you. OK that last part was bullshit on my behalf except for the orchestral moments but you should get the idea. Which leaves me to say that this is by far the best thing ABIGAIL WILLIAMS ever released albeit not so original. Hopefully it won't end here.