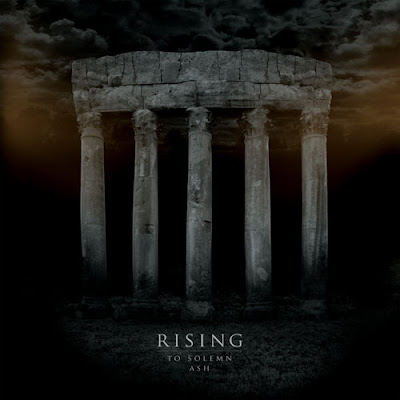 
There was a time when European bands would take something created yet forgotten about here in the states, revamp it and shove it right back in our faces to enjoy. This is not one of those times. Since sludge metal has reached it's third wave of existence the lion's share of it has become a mediocre soulless bore. That's why indie rock losers and the human tapeworms of pop media like it all of a sudden. I guess we can thank MASTODON for that since "they're a metal band indie rockers can like", according to an indie rock loser scribe in my local area. I'm not knocking MASTODON here it's just that most of the bands created in their wake are about as exciting as eunuch porn. What's worse is that it's being copied by the Europeans.


Case in point here we have this Danish sludge trio who follow the third wave template in all of it's cliche fashion. This band's debut full length, To Solemn Ash, originally came out over in Europe in the Fall of 2011. How it was received I don't know but going from experience I'm guessing it didn't fare well. For two decades we've been sending the Europeans plenty of this sludgey stuff. Their answer has always been "thank you but we already know what heavy music is. We did create Doom you know. You yanks can keep your guttural stuff." Hey there are little enclaves of fandom over there but for the most part what I'm saying is true.


As far as this band's release goes well let's run it through the mediocre menu check list. Heavy chugga chugga riffs, check. Vocalist sounding like he's yelling from the other fuckin side of a warehouse, check. Post Hardcore isms, check. When I first listened to this, by the third cut I wondered how much more contrived can this fucking thing get? After listening to it through the answer is a lot. I can't wait to see if they tour the states and whether or not they play Savannah, Georgia. I think it would be funny.