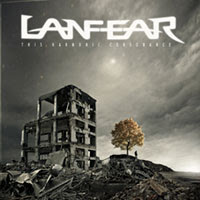 I must admit that I'm not a huge fan of the European-styled Power Metal. It's not that I haven't been exposed to enough of it because trust me I have and I've got a few CDs. Basically I chalk it up to not liking everything in Metal. Now with that aside I won't let my own personal bias get in the way here because Germany's LANFEAR are clearly a talented band. Their being together since the mid-90s and producing seven full lengths is quite a feat to say the least. This Harmonic Consonance is their first since 2008 also being their first for Pure Legend / Pure Steel Records. I don't know the reasons for the creative drought.


To be specific LANFEAR play progressive power metal with emphasis on the heavy handed riffs over keyboard driven atmosphere run amok. One of my problems I have with certain acts of this genre is when a band starts playing something similar to opera instead of metal. Thankfully that's not the case on here. LANFEAR clearly are on the metal side of the aisle albeit a lighter one. Of course no power metal metal act would be worthy without a decent enough vocalist and this band has a good one in Nuno Miguel de Barros Fernandes or just Nuno for short, who joined the band in 2006. To say this guy has a strong voice is putting it mildly. Since I never heard the man he replaced, Tobias Althammer, all I can say is Nuno has the voice capable to reach the high notes as well as keep a chorus going.

I'm not gonna go through this song by song. Music like this is generally better to take in as a whole piece of work. There's a few epic pieces which do stand out as kick back to relax numbers. A few all out thrashers (well not that all out), some darker prog elements and of course the ballad like material. This Harmonic Consonance has enough variety that it's more of a listening pleasure for close to fifty minutes than something to break down the walls with. Personally I like the wall smashing stuff but hey you can't argue with something decent.