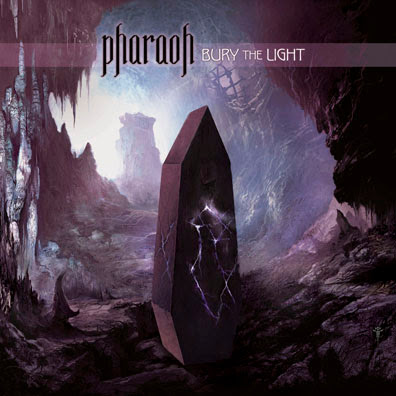 It's been a while since I've written something about a band's release from this label. I don't wanna get into specifics but lets just say some people just don't like a less than glowing review. Be that as it may that won't be the case here for this latest one from PHARAOH. I'm also going to try to get through this review with out any blatant puns as possible. In all honesty this is the first time I've heard something from this band. They've been around for a while that's if you consider 2003 a long time ago. Supposedly their debut from that year, After the Fire, made a pretty big splash within the traditional heavy metal realm. Their follow-up, The Longest Night, from 2006 sealed their existence in the underground scene. Let's make no mistake here people. Traditional heavy metal or power metal bands might be huge in Germany but everywhere else they're in the underground. I seriously doubt these guys headline at the Troc in their home town of Philly.


Bury the Light is this band's fourth full length so if you're into classic sounding metal / power metal with plenty of MAIDEN and RUSH worship than this will be sitting close to your stereo throughout 2012. Now no offense to this band's rhythm section they do an excellent job on here. But for me the two things I like best about this release come in the forms of guitarist Matt Johnsen and vocalist Tim Aymar.
First off you've got to remember that I use to live in a mid-size burg in Pennsylvania just north of where these guys call home quite a few years ago. Back then I saw almost all of the great bands of metal from the late 70's and early 80's. So let me tell ya that when I say Matt Johnsen's guitar style comes right out of the handbook of metal guitar godhood I'm speaking from experience. The songs on here are chock full of excellent catchy riffs. He also lays down these harmonious solos that yearn for air guitar theatrics.


As for Tim Aymar's singing ability this guy is classic heavy metal vocalist all the way. It's not that he reminds me of anyone from the past in particular. It's just that he's in a caliber of greatness which consists of not only the ability to let loose a heavy metal scream but his overall range is magnificent. It's kinda rare these days to hear a vocalist with this type of operatic vocal dynamic. Sure there are a lot of good vocalists out there in metal today. But most of those guys are shooting for the styles of Halford, Dickenson and King Diamond. I'd put Aymar's singing ability up there with David Byron of URIAH HEEP (as a matter of fact I did see URIAH HEEP once back in the day although they had John Lawton singing for them then). That's pretty much it all in a hand basket there people. Imagine the best of PRIEST, RUSH, MAIDEN and HEEP all rolled into one. If that doesn't excite ya well then fuck ya.

Sorry no video for this.