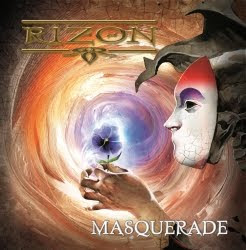 The Swiss seven piece band RIZON have been honing their brand of metal since their original formation in Zurich back in 1997. They've put out two previous releases, Evolution in 2005 and Sudden Life in 2008. Now here we have their third full length Masquerade which came to me with the promise (promo expectations) of being a "catchy melodic-Metal-mix without being one-dimensional." Calling them Power Metal might be disingenuous on my part. Sound wise RIZON are more melodic hard rock with duel vocalists (male and female).


I'm guessing that this band does well within the European power metal festival circuit but for me it's far too mainstream rock sounding. Instead of hard edged metallic charged rock the band relies on plenty of melancholy and harmony with swirling atmospheric elements provided by the keyboards. The band skirts the symphonic curtain making this more of an operatic rock act. I'm thinking a Swiss version of MEATLOAF with a touch of gothic sense.


I can't complain about the vocals since both Matthias Götz and Seraina Telli are extremely talented in their departments. At the least they're not following the cliche beauty and the beast female / male vocal-duo style favored by other acts. Musically the musicianship leans more to the pop side of the rock isle and that's something which makes me grimace in disgust. I'm left kicking back in my chair wondering where's the metal? This band prides itself on not being one dimensional. Fine so let that ride you to a staring gig on a Swiss musical variety TV show.