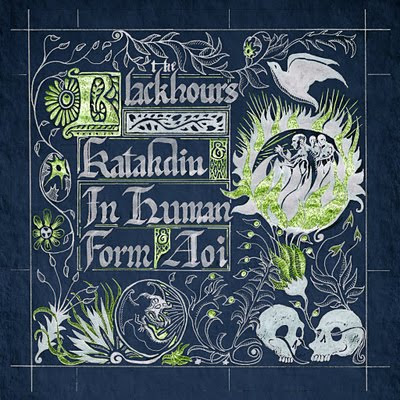 What we have here is a split release with two black metal acts and some medieval folk act called AOI tacked on. Frankly I have no idea why the Gregorian boys choir thing was on here and I kinda hate it. Then again if you're from Penn State you might feel otherwise. So let's stick with the actual bands on here.

First off there's IN HUMAN FORM who hail from a place called Lowell, Massachusetts. These guys are a raw blackened thrash four piece whose off kilter time signatures must mean they're progressive as well. This band contributes two cuts to this comp both of which are long and slightly complex numbers. Sadly though I think the poor recording of their tracks does them a disservice. Off the top of my head, and I am including the horns, I just can't think of any true (or is it "troo") blackened progressive thrash acts out there today. I think if this was cleaned up they would be like VOIVOD meets DEATHSPELL OMEGA.


The second act on here is KATAHDIN hailing from Connecticut. Out of the two bands on here it's this three piece which sounds like the more accomplished one as well as having a dynamic sound. Their three cuts on here push into the progressive realm of blackness slightly. Their drummer is a fuckin maniac to say the least. This band's more frenzied attack kinda reminds me of early ABSU. Also when they set up on a stage they better put their drummer up front as well. I think this is a band for fans of over the top BM excitement to keep an eye on as opposed to those fly by night so-called "artists" outta New York.